How Blogging Helped My Wife Retire Before 30

Wow. I honestly wouldn't have thought that just three years after starting this blog, I'd be writing a post like this one. I've actually been sitting on this news for a few weeks now, but my wife, Coral, reaaaalllly wanted me to hold off on sharing it here until it was 100,000% a done deal haha.

Because of how well this site has done so far, my wife officially resigned from her job a few weeks ago, and her last day with her school district is coming up in just a few weeks. She's retiring. Done. Out.

Now before we get started on how we got to this point with the business and how this will all work – I want to brag on my wife a little here for a few reasons:

I'm not sure if I was super nervous talking to her about it or not to be honest. That part of it all seems to be a blur.

But I'll never forget how quickly she agreed to support me while I chased this dream a few years ago. Now, I don't know for sure what other spouses might do in this situation given the fact that I was chasing a completely unproven business, but Coral didn't even flinch.

The conversation of me quitting my job after making a cool $3 in ad revenue for this site basically went down like this:

Me: “Hey…I don't know how to say this…but I want to quit my job so that I can run M$M full-time.”

And that was pretty much it. She somehow didn't panic or seem too worried, even though internally I was freaking the hell out. I hadn't run a business before. I barely even knew what I was doing.

I was just some random guy writing nonsense about student loans.

You know what's even crazier about the whole thing?

Coral and I were about to get married. Looking back on it now, I can't believe that I went to my soon-to-be wife and told her I was giving up my income right before we became legally and financially spliced together.

She was just so confident in me, and I was floored. It was like she could see something in me that I couldn't see in myself at the time.

She also knew I was miserable at my job, felt trapped, etc. I'm sure she could tell that I wasn't happy and it played a factor in the way she reacted, but there were probably other ways I could have done all of this to step away from teaching more gradually.

What Coral did for me in that moment is probably something I can't ever really repay her for, but I've still always made it my mission to do just that with this blog.

She helped me leave my job, so I would do everything in the world I could to make sure she would have whatever type of life she wanted.

If my wife came to me right now and asked for a pony, there would be two in the backyard before she came home from work.

But she doesn't ever ask for stuff like that (which is nice because ponies are probably really hard to take care of).

The point is – just getting her blessing and support for my dream of running M$M full-time is one of the nicest things anyone has ever done for me. There's just no other way to put it. I'll continue to do everything I can to support her dreams in life too.

Here's how we prepared financially for her early retirement:

So obviously, in the first year or so of me running the business I wasn't really making enough money to support us financially. We were basically living on her teaching salary for a while, which wasn't too bad but it did push back a lot of the things that we wanted to do in life (like getting a house).

Try getting a mortgage for a decent house on one teaching salary and less than two years of self-employment. It's…not easy haha.

Fortunately, it actually didn't take too long for me to bring in an amount of money that was pretty close to my old teaching salary. But one thing I learned pretty quickly about having a new business is that you just never feel comfortable month to month financially, even if it seems like things are going pretty well.

This will sound stupid, but even with bringing in nearly $200,000 of revenue from this blog in 2017…I STILL worried about everything at the beginning of each month.

Would the business do as well this month?

What if I lose a marketing client or don't have enough views on the site this month?

What if the whole thing falls apart?

That's one of the reasons that I say that Coral has just as a big a part of this site's success as I do.

My wife is basically my best friend, mentor, and THERAPIST all wrapped up into one human. There are so many times that she had to tell me that everything would be OK, or she'd have to sit there and listen to me complain about all the things I usually complain about or freak out about everything that could possibly go wrong.

It's probably not easy being married to an entrepreneur. I'm already hard enough to deal with as it is and inexplicably leave my laundry on the floor every day, and then you add the hyper-stress of trying to build a business from scratch and I don't even know how we're still married.

But, I digress. Totally got off topic there haha. Back to the money stuff.

Anyways, as the business started to grow, we slowly started to talk more about her leaving her job.

It's not like she hated her job or anything like that. She actually has a pretty sweet gig and really likes the people that she works with. She basically teaches other teachers how to use technology in the classroom, and she's great at it. I'd 100% support her if she wanted to stay and do that for the next 20-30 years.

But when we talked about it, she said she wanted to leave eventually. So that was that.

Last year, we started slowly preparing by flip-flopping over to living off of the salary that I paid myself from the business instead of spending her salary.

We had been doing that for months, and then at the end of 2017 we just talked about it again and she decided that she definitely wanted to leave at the end of the school year.

The next month, I launched the FB Side Hustle course and everything blew up even more. At that point, it was almost a no-brainer.

What are we going to do with her retirement money?

We're going to pull her retirement funds, directly roll them over to an IRA, and invest the crap out of them.

I've actually been really excited for months now to get my hands on that money because in TRS you have zero control over the funds that you put into retirement. I could write an entire post about things I don't necessarily agree with in that retirement system, but I won't hash that out here.

Basically, I'm just really excited that we'll be able to actually do something with that money from now on.

But what about health insurance?

After doing a ton of research on Health Sharing Ministries and talking to some of my blogging friends about it, we're going to jump on to one of those programs (haven't quite decided which one yet, so if you're on one feel free to share your experience in the comments).

Coral's insurance was OK, but it wasn't like the crown jewel of health insurance policies. I wasn't even on her insurance policy because the monthly premiums were ridiculous, so it's not going to be too big of a shock for me to move over.

Fortunately we're young and in good health for now, so I'm hoping it will go smoothly. You just never know when it comes to health stuff, but I've actually been really impressed by the number of reader stories that are positive in regard to the health shares.

So…what is she going to do now?

The cool thing to me is that she's going to be able to completely wipe the slate clean and just do what she wants to do. As far as the business is concerned, she can be as involved with M$M or not involved as she likes.

My guess is that she will want to help out with some things, but I really don't know.

I hope that she just takes some time to enjoy not having to wake up at 5:00 am to get ready for work, sleeps in, takes her mom shopping randomly…whatever she wants really.

One of our biggest goals is to do a lot more traveling in the coming year, and I want to be better about stepping away from the business and taking mental breaks which this will most definitely force me to do.

It's kinda funny because a lot of my peers in a similar situation as us (being a blogger and spouse not having to work anymore) live in vans/RVs/boats and travel full-time.

We love our house and the area that we live in right now, so even though we see other people living those unique lifestyles…it's just not really for us at this point.

Maybe later down the road though, who knows?

I'm sure we'll figure it all out eventually.

So since I know you're reading this Coral: I love you, thank you again, and let's go eat some awesome steaks and drink wine that's too fancy for me tonight. 🙂 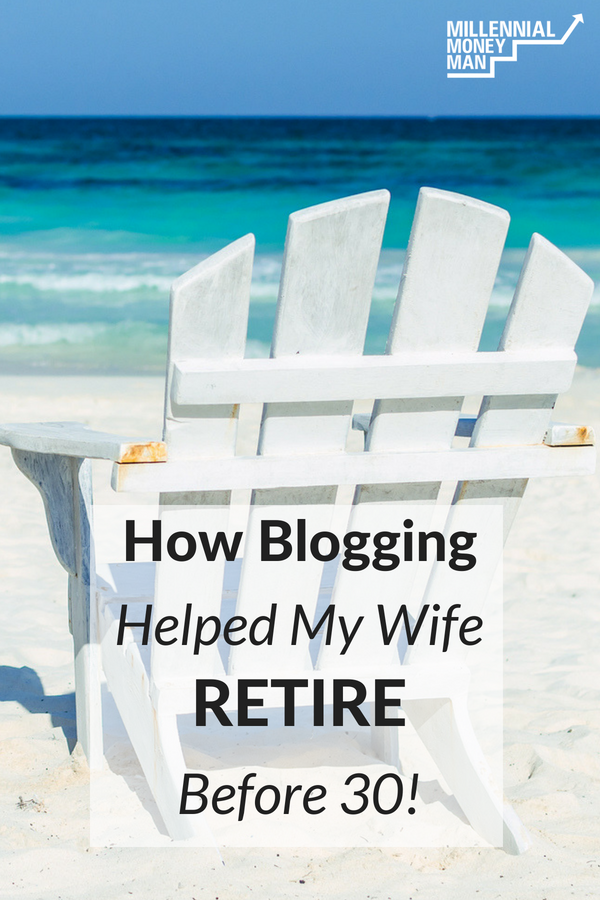