Does Your Personality Affect Your Finances? [Test Inside]

Have you ever taken a personality test? Up until the beginning of this year, I’m not sure if I ever had before! But…that all changed back when we started Laptop Empires earlier this year.

The reason for taking the test had absolutely nothing to do with personal finance – my assistant, business partner, and I wanted to see what types of personalities we all have so we could work well together.

At first, I honestly thought that personality tests were a little pointless. I mean…it might get close, but is some simple test really going to make me understand why I do the things I do?

Probably not. It seemed pretty similar to voodoo science or horoscopes (no offense if you’re way into that stuff).

I took this test from 16 Personalities, and my mind was freaking blown.

Now you might be wondering if this is a sponsored post for them, but it’s not. I kinda wish it was because I would love to get paid for something like this haha.

I’m honestly just sharing this with you today because I think it’s a lot of fun to take a test like this, and after getting my own results (which I’ll talk about below), I really started to think about the “why” behind the way I’ve approached my own finances in the last few years.

I share free budget templates all the time with M$M readers! They really do work.

But tracking every expense has always been something I wasn’t excited about. I much prefer to use online tools like Personal Capital and Mint that track everything for me.

For whatever reason, I’m way more about the big picture. One of my life goals is to be a multi-millionaire (like have at least 10-20 million dollars in the bank) by the time I turn 40.

Everything I’ve done in the past few years has been to put myself and my wife on that path. M$M, my digital marketing business, Laptop Empires…all of it.

And along the way, I don’t focus too much on the small details as long as it looks like I’m getting to where I want to go.

This is where my wife comes in. She’s super into the details. She likes spreadsheets. She gets the stuff done that I don’t focus on, which in reality is probably what makes it all actually work.

Basically, she’s a nerd (she doesn’t really read my posts anymore so I can say whatever I want). 🙂

After we took our personality tests, it all made a lot more sense! I was actually really surprised by how accurate the test was, and it made me think a lot harder about why I make certain financial decisions.

Here’s what my personality test results were:

“The INTP personality type is fairly rare, making up only three percent of the population, which is definitely a good thing for them, as there’s nothing they’d be more unhappy about than being “common”. INTPs pride themselves on their inventiveness and creativity, their unique perspective and vigorous intellect. Usually known as the philosopher, the architect, or the dreamy professor, INTPs have been responsible for many scientific discoveries throughout history.”

You can read more about my personality type here, but the basics are that I really focus on being inventive and creative, and pretty much ignore everything else along the way.

In fact, here’s the graphic that 16 Personalities uses to describe people like me:

Notice how she’s super-focused on the thing that she’s trying to figure out, and everything else is total chaos and grayscale behind her?

My wife saw that picture above and laughed like crazy. All you have to do is take one look at my office sometimes to know that I work like a madman on the stuff I’m focused on, and everything else will be a total disaster because it’s not as important to me. It’s actually really annoying haha. I don’t even notice half of the things that happen around me while I’m going through my day-to-day existence.

Fun fact: I didn’t even have an emergency fund when I was paying off my loans at first. I just started throwing as much money as I could from my teaching paychecks at the debt and hoped for the best.

Most normal people would probably have planned out everything quite a bit more, but for some reason, my brain just laser-focuses in on stuff and I make the biggest moves possible to make it all happen.

I did end up paying off my student loans in 18 months, but if I had some kind of medical emergency or big expense during that time…I would have been 1,000% screwed.

But looking back with some context from this personality test, I get it. Even better – now that I know how I do things naturally, I can do more to alter my behavior moving forward.

By the way, my personality type also comes with some wonderful negative side effects like:

You can read through my strengths and weaknesses here (16 personalities gives you a list for each personality type).

I don’t necessarily agree with all of them, but my wife said that it was kinda true so here we are haha.

Oh, if you were wondering, here’s what my wife got:

“The ISTJ personality type is thought to be the most abundant, making up around 13% of the population. Their defining characteristics of integrity, practical logic and tireless dedication to duty make ISTJs a vital core to many families, as well as organizations that uphold traditions, rules and standards, such as law offices, regulatory bodies and military. People with the ISTJ personality type enjoy taking responsibility for their actions, and take pride in the work they do – when working towards a goal, ISTJs hold back none of their time and energy completing each relevant task with accuracy and patience.”

See? She’s an overly-organized nerd. You can read more about her personality here.

You should take the test too!

Now look – I’m not saying this thing is absolutely scientific, but it does seem pretty scarily accurate for everyone that I’ve given the test to so far.

If nothing else, it’s a lot of fun and a killer conversation-starter if you’re with new people. Best of all, you might find out why you approach personal finances the way that you do!

Take the test here (it takes 10 minutes or less) and then drop your personality type in the comments below! 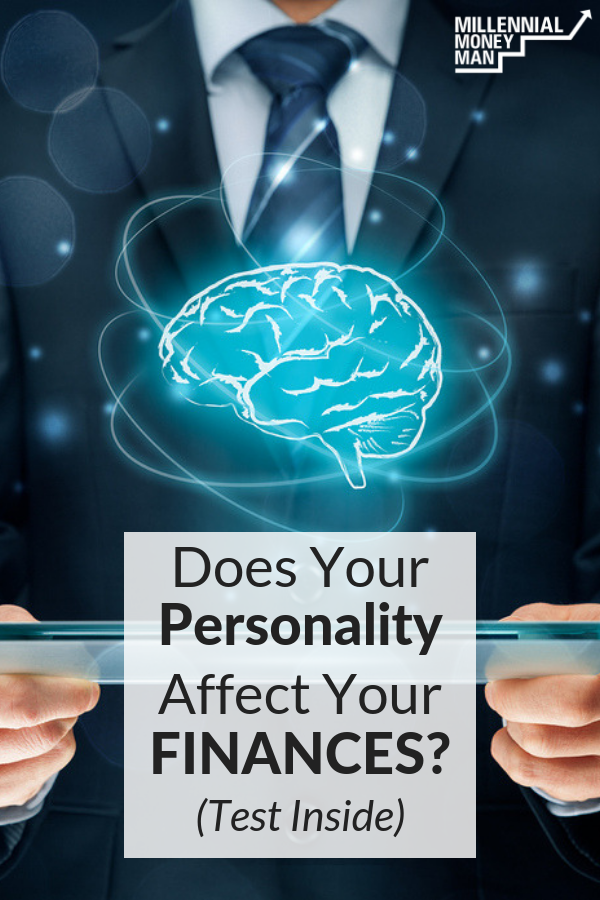