If you’re interested in taking online surveys, then you need to read this OneOpinion review. Unfortunately, it appears this once legit survey site is no longer accepting new members and current members are experiencing issues with their accounts and getting paid.

Online surveys offer you an incredibly easy way to make extra money— you get paid for sharing your opinions. But, surveys don’t pay well, and that’s why you need to know about the best options available.

This OneOpinion review will explain the platform and give you the best alternatives for 2023.

OneOpinion is an online survey platform founded in 2011 and is owned by Dyanta. They conduct surveys for leading market research companies and pay users points for completing surveys. OneOpinion members can trade their points in for gift cards.

OneOpinion is 100% legit, and they’ve been doing market research for 10 years now. However, it appears that OneOpinion isn’t accepting new members. I had someone on my team try to sign up to confirm this, and here’s the response they received:

This is a major bummer. But after reading a bunch of OneOpinion reviews on sites like Trustpilot and SiteJabber, not accepting users seems like it’s part of a wider issue. Members complain of accounts suddenly disappearing, being unable to cash out their points, and no longer seeing any surveys.

Up until recently, most OneOpinion users seemed to have a really great experience using the site.

Here are some OneOpinion reviews from users: 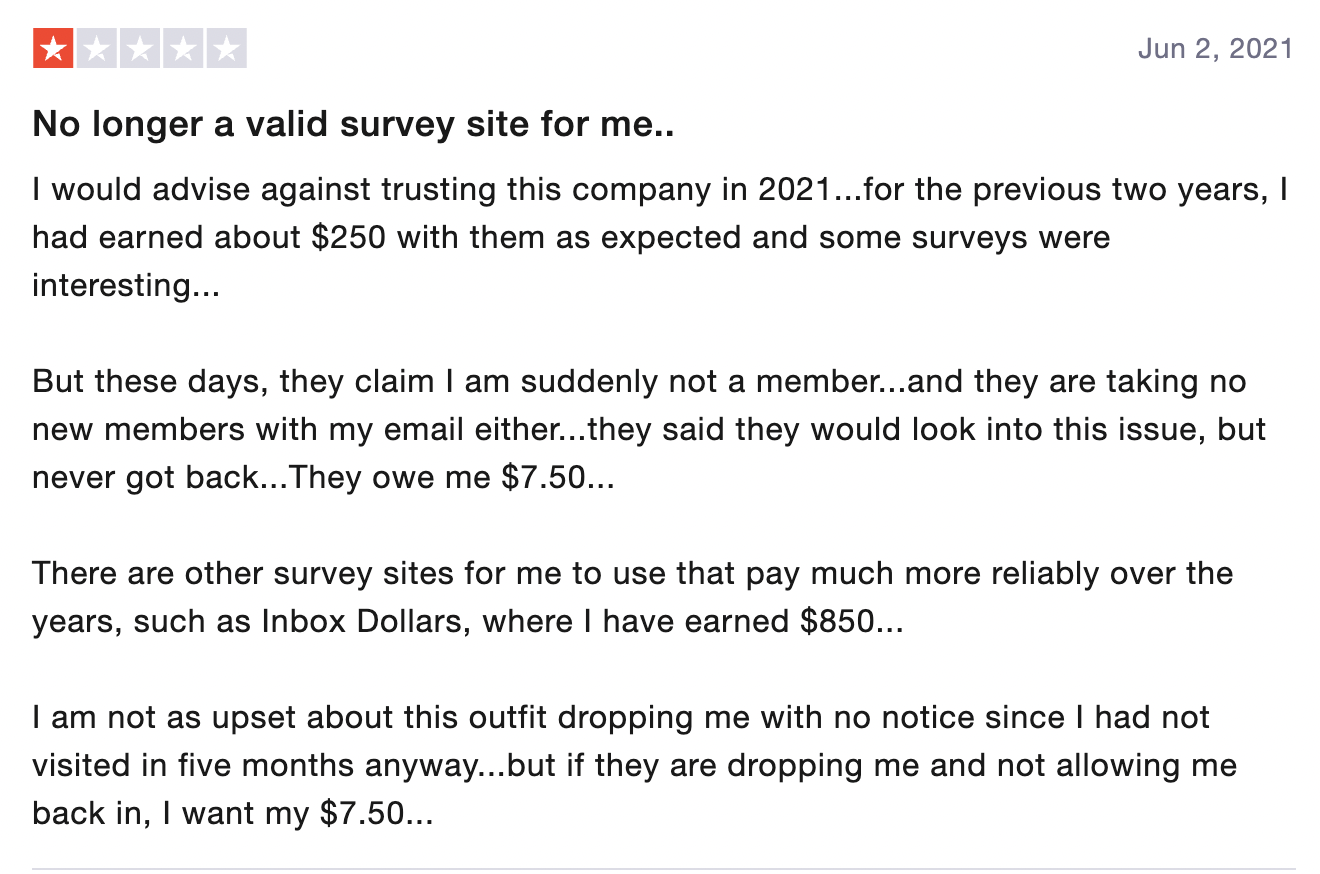 Fortunately, there are a lot of really great alternatives to OneOpinion. There are plenty of legit survey sites out there accepting new members and continuing to take good care of their existing ones.

Because OneOpionion reviews from current members show a decline in service, I want to focus on which survey sites you should check out instead.

Survey Junkie has grown to be one of the most popular survey sites since it launched back in 2005. In addition, this site is 100% free for users — all of the survey sites on this list are free, and that’s a sign that they’re legit.

The way Survey Junkie works is that you take short surveys, most last about 15 minutes on average, and they pay you in points for each survey you complete. The points convert to cash or gift cards, and 100 points = $1.

Once you’ve earned 500 points, you can redeem them for cash via PayPal or bank transfer. U.S. residents can also redeem their points for gift cards to Amazon, Groupon, iTunes, Sephora, Starbucks, Target, and Walmart.

Compare to OneOpinion, Survey Junkie also shines because you only need 500 points to exchange them for cash. OneOpinion required you to earn 25,000 points before you could cash out, which takes significantly longer. 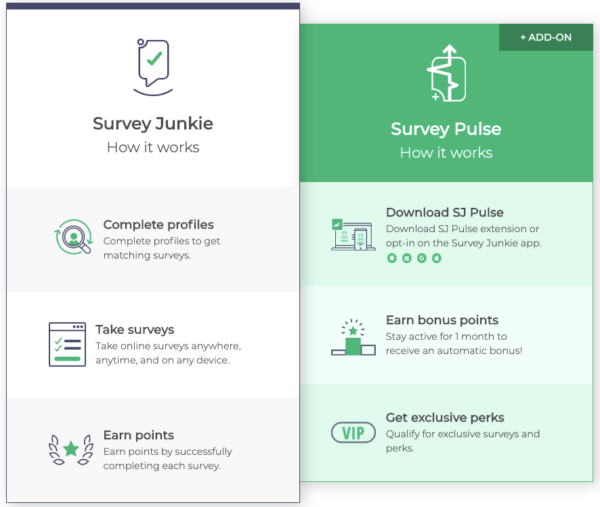 SurveyJunkie also has a web browser extension called SJ Pulse that you can download to earn more points. It collects information about your online activity. Don’t worry, they aren’t collecting any sensitive data, like passwords, credit card numbers, etc. You need to keep the browser extension installed for at least 3 months to receive the payout.

Survey Junkie pays an average of $1-$3 per survey

You can start taking paid online surveys as soon as you sign up for Survey Junkie, which takes about 5 minutes or less.

MyPoints is another great alternative to OneOpinion because they offer more than just paid online surveys. You can earn points for watching videos, playing games, shopping online, downloading a browser extension, and more.

The surveys on MyPoints pay in points that are worth an average of $1-$3, and they even pay you for disqualifications. You don’t earn the total points value, but you’ll earn some for your initial time investment. Disqualifications are really common with survey sites because they’re looking for information from people who fit specific demographic models.

MyPoints also has a strong referral program that pays you whenever someone signs up and starts taking surveys through a unique MyPoints link they give you.

MyPoints pays in points that you can redeem for PayPal cash, Visa gift cards, and gift cards to over 80 different retailers nationwide.

The surveys on Swagbucks are worth an average of $0.40 to $2 in points, and you can redeem those points for PayPal cash or gift cards to over 140 different retailers.

One of the things I think you’ll like about Swagbucks is that you can see the expected time for each survey, guaranteed payout, and total payout for each. 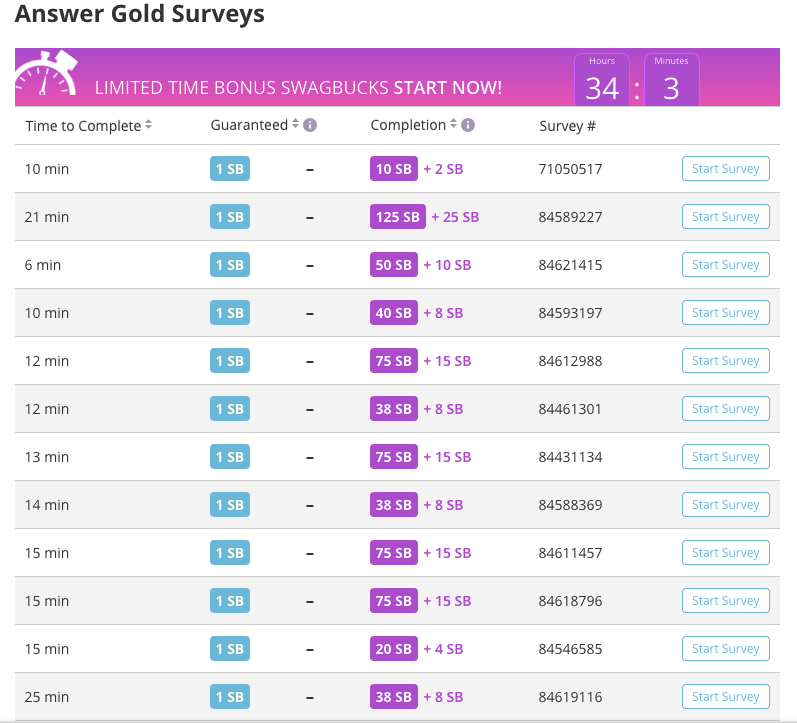 You’ll notice in that list that some surveys pay a lot more than others. They base payouts on the time it takes to complete the survey and how needed that survey information is.

Swagbucks also has a really popular referral program that pays you 10% of the points your referral earns, and there’s no maximum limit.

You’re not going to get rich playing games and taking surveys through Swagbucks, but it’s an effortless way to earn a little extra cash.

Get started with Swagbucks

Branded Surveys has been around since 2012 (they were formerly known as Mintvine),and they have over 2 million users in the U.S. alone. New users earn 50 points for signing up, and you can start redeeming your points once you hit 500 points. Each point is worth $0.01, so 500 points = $5.

You can redeem your points for cash via PayPal or bank transfer, but your points also convert to online gift cards, which is probably the fastest way Branded Survey pays.

Branded Surveys is a great alternative to OneOpinion because they have a strong loyalty program that pays members bonus points each week. The program has several tiers, and you move up when you take more surveys, so it’s a reward for spending more time on the platform.

Surveys average 10 to 20 minutes long, and you can start taking surveys as soon as you sign up. Branded Surveys is open to U.S., U.K., and Canada residents.

Back in the day when I was taking surveys for extra money, Pinecone Research was my go-to site, so I know they are a 100% legit alternative to OneOpinion. PineCone Research has been around since 1998, and they’re owned by The Neilsen Company, a market research firm with an A+ rating with the BBB.

Pinecone Research pays an average of $3 to $5 per survey. While they have some of the highest-paid surveys, they are invite-only surveys.

Again, surveys look for consumers who fit specific demographic characteristics. Most survey sites let you start taking surveys to see if you qualify, but Pinecone Research invites you to ones they’re confident you will qualify for. This means fewer survey opportunities but fewer disqualifications.

Earn $3 to $5 per survey with Pinecone Research

Pinecone Research pays in points that convert to checks, gift cards, or PayPal cash. So you can cash out with as little as $3 in points.

Opinion Outpost is owned by Dynata, the same company that owns OneOpinion. I get if you’re skeptical since OneOpinion reviews are so bad, but I did my research.

Opinion Outpost is accepting new members, and you earn a 5-point welcome bonus for signing up and completing your first survey. They also have mostly positive reviews on Trustpilot.

The surveys on Opinion Outpost take an average of 15 minutes to complete and pay anywhere from 5 to 50 points each. You can also earn $1 for every friend you refer, up to $5. Referrals must complete at least one survey before you get paid.

Like Branded Surveys, a membership loyalty program pays you bonus points as you move up membership tiers. The idea is that they’ll reward you for spending more time on the Opinion Outpost platform.

Opinion Outpost pays in points that convert to PayPal cash or gift cards, and you only need to earn 50 points, which equals $5, to start redeeming your rewards.

Since OneOpinion appears to be defunct (or at least no longer accepting users, as of December 2021), I’d rather you spend your time looking at survey sites that are actively accepting new members.

Survey Junkie is my top pick because the sign-up process is easy, they’ve lots of paid survey opportunities, and you can earn $1-$3/survey on average. If you’re looking for a survey site to start with, check out Survey Junkie.

Remember, you’re not going to get rich with surveys — they pay very little for your time compared to other side hustles. If you’re looking for something more lucrative, check out my list of best side hustles for 2021.

OneOpinion has been a legitimate survey site for 10 years, but as of 2021, it appears they are no longer accepting new members. And, current members are reporting issues with redeeming points, accounts being shut down, and virtually nonexistent customer service.

What is the best survey site?
+-

Survey Junkie is one of the best options for taking paid online surveys, but you can sign up for multiple survey sites at a time— this is how you end up with the most survey opportunities.

How do I join OneOpinion?
+-

It appears that OneOpinion is no longer accepting new members. The sign-up process used to take a short membership form, but now new sign-ups are receiving a message that says, “Currently all membership quotas are filled.”

Yes! Swagbucks is a free and legit rewards platform that pays members to take surveys, shop online, watch videos, play games, and more. Of course, you won’t make a ton of money using the site, but it’s easy, mindless stuff. Check out my Swagbucks review to learn more. 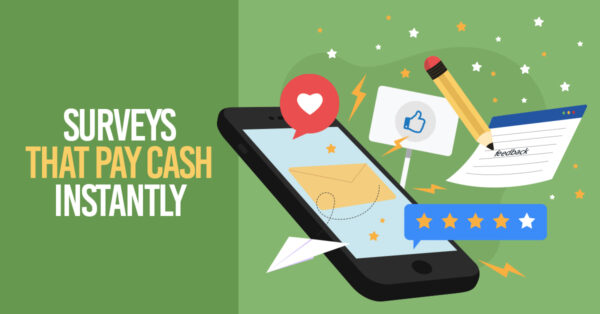 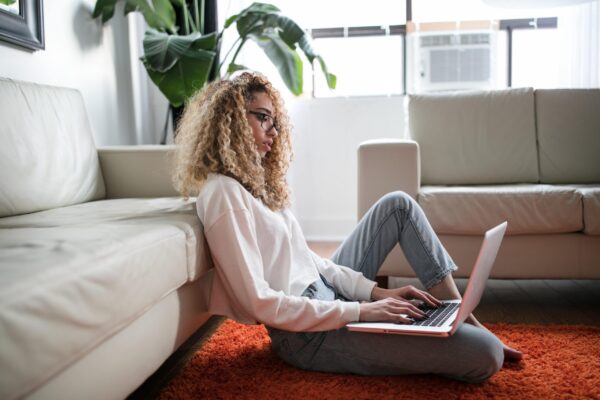 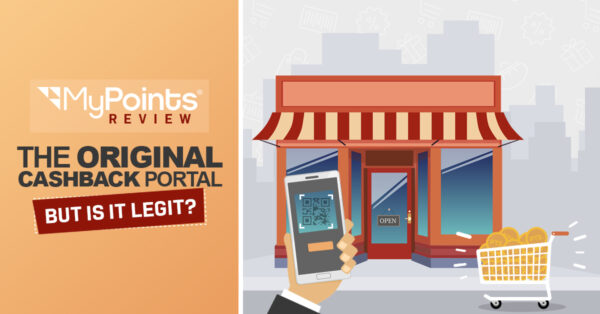 MyPoints Review | The Original Cashback Portal… But is it Legit? 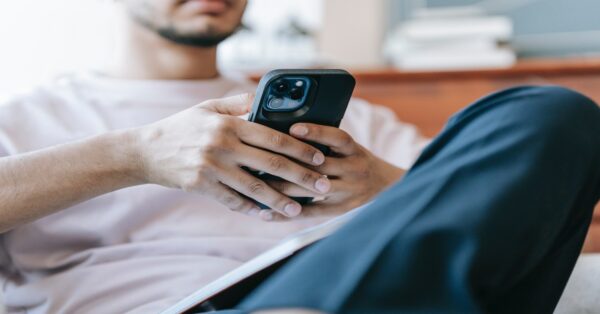 Branded Surveys Review 2023: Is It Legit?