If your car is sitting unused or you want to offset your car payment, Getaround is a peer-to-peer rental marketplace where you can make extra money renting your car to individuals, rideshare drivers, and delivery drivers. Getaround charges a 40% commission on every rental fee, and you can rent your car for an average of $35-$45/day.

Because it sounds too easy and too good to be true, one of your first questions is probably: Is Getaround legit? This Getaround review will answer that question and more.

Getaround is a peer-to-peer car rental marketplace where owners can rent their cars to people who need a vehicle for a couple of hours, or a day, a week, or longer. The platform was built on the idea that the average car sits unused for 22 hours a day, so why not put your car to better use?

The cars rented on Getaround can be used for personal use, like maybe someone is traveling and wants to try Getaround as an alternative to traditional car rental companies. Another use is for food delivery or rideshare drivers whose personal car is out of commission. They can use Getaround to keep working and prevent any lag in their income.

Getaround isn’t the first company to do this either. There’s a growing trend of peer-to-peer renting, especially with cars. There’s Turo, which is similar to Getaround. And there’s also HyreCar, which is specifically for rideshare and food delivery drivers.

What’s really cool about Getaround is that, as a renter, there’s the potential to make a decent stream of passive income. You’re not actively trading time for money. You can keep another side hustle or job going while also renting your car out. That’s pretty sweet.

At the core of Getaround is something called Getaround Connect (after reading some other Getaround reviews, I learned that this used to be called the Instant). Getaround Connect is a device that provides GPS tracking, anti-theft functionality, and cellular communications.

Connect is installed on your car so renters can unlock it using the Getaround app, and this means owners and renters don’t have to meet in person to exchange keys. The device basically disables the car’s starter when it’s not being used by a verified renter or the owner.

Car owners pay a $99 installation fee to have Connect installed, and there’s an additional $20/month subscription fee you have to pay that covers data network access. Getaround offers a 90-day free trial, so you don’t pay any of these fees until the end of the trial period.

Your car needs to meet certain vehicle eligibility requirements before you can list your car on Getaround, including:

There are some makes of cars that are restricted on Getaround, and they are:

If you’re interested in renting a vehicle on Getaround, there’s a screening process to ensure that only verified renters can use the site. You’ll go through a signup process, and Getaround cross-checks driving records with the credit bureau and 16 other points of reference.

The renter eligibility requirements are:

Getaround has a comprehensive insurance policy similar to personal auto insurance. This is a $1 million policy administered by Sedgewick and covers renters through the duration of their rental period. The policy covers any accidents that happen while the car is being rented, and there’s also a Protection Plan that covers any damage that happens to your car. If you’re interested, you can read more about their policy here.

How much do you make with Getaround?

Most cars are listed on the app for around $6-$10/hour, and Getaround takes 40% commission from each listing. The commission covers costs like insurance and roadside assistance.

To get an idea of what you can realistically make, let’s say your car is listed for $8/hour and it’s rented 10 hours every week. That’s $80. When you subtract Getaround’s commission, you earn $48/week or $192/month.

However, there’s also the $20/month subscription fee for Getaround Connect, and you’ll also want to consider side hustle taxes. Most tax professionals will tell you to set aside 30% of what you earn for taxes.

In our example, subtracting $20 for Getaround Connect and 30% for taxes brings your actual earnings from $192/month to $114/month after taxes if your car is listed for $8/hour and rented for 10 hours a week.

I think it’s important in any Getaround review to give you a realistic estimate of what you can earn, but it's also good to remind you that this is passive income.

You can earn a little more with Getaround’s referral program. For renters, if anyone signs up to rent through your referral link, you and your friend get a $20 coupon code, but if they sign up as an owner, you get a $200 credit. Owners receive a $200 bonus when someone signs up as an owner through their link.

Owners are paid via check or PayPal once a month on the 15th.

How do you decide how much to list your car for?

To determine the hourly or daily price of your car, Getaround uses a dynamic pricing model called predictive pricing. This algorithm looks at more than 20 different variables based on demand and your vehicle, including:

Getaround says predictive pricing is used to determine an optimal listing price. You can see the price of your listing change throughout the day, week, and month in your Getaround dashboard under Pricing. It will look something like this: 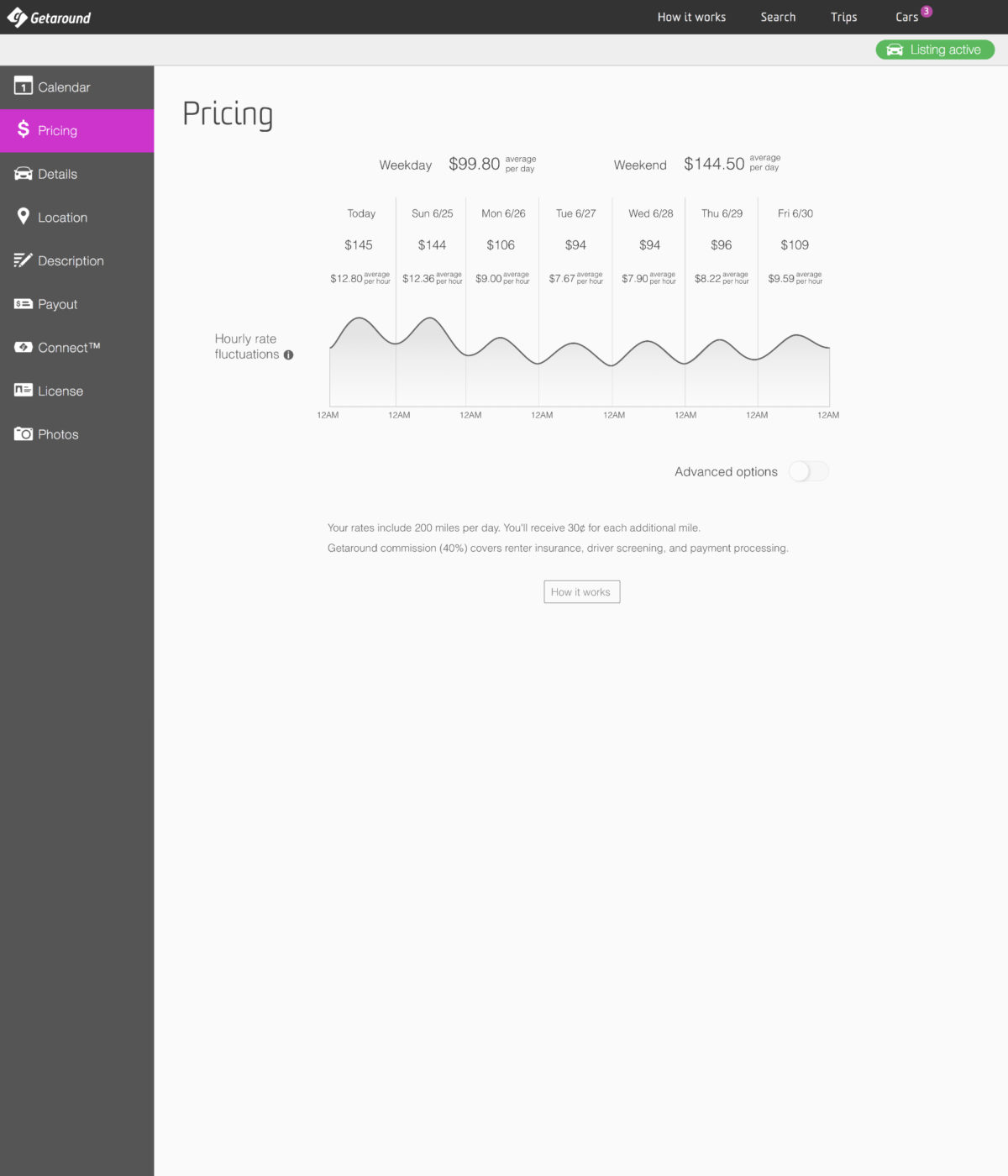 Where is Getaround available?

Getaround is currently available in 41 cities across the U.S. This includes cities like:

Representatives from Getaround handle the majority of the listing process, but you can start by signing up on Getaround.com.

You’ll need to meet the vehicle eligibility requirements listed further up in this Getaround review, and the initial form asks for basic information about your vehicle’s make, model, year, and mileage. You’ll also enter your name, email address, phone number, and zip code.

After you submit that information, someone from Getaround will contact you to finalize the listing process. This includes your car’s availability schedule, and if pets or smoking is allowed.

The representative will also set up a time to have the Getaround Connect device installed in your car.

How does Getaround compare to its competitors

It wouldn’t be a solid Getaround review unless we looked at how it compares some of its competitors, and there are two big ones: Turo and HyreCar. Let’s take a look:

If you’ve spent any amount of time researching whether or not you want to use Getaround, you’ve probably come across some negative Getaround reviews. Getaround is currently rated 3.8/5 on TrustPilot and has a 1.24/5 rating on the Better Business Bureau website.

Here are the most common issues in customer reviews:

What do you do about those Getaround reviews?

The reality is that renting your car on a site like Getaround or anywhere else presents some kind of risk. You’re offering your car up to strangers and trusting a company to take care of any issues.

On the other hand, Getaround presents an easy, passive way to make extra money. You have to decide if it’s worth the risk. The vast majority of people are probably going to be fine taking that risk and will benefit from that extra cash, but they’re less likely to mention it on those review sites.

If you want to learn how to rent out your car to make money, you can realistically make $100-$200 extra per month (after commission, fees, and taxes). There’s also a 90-day trial period that allows you to test out the platform before you commit to paying for Getaround Connect.

Getaround has a trial period to give you a chance to try things out before you make a larger financial commitment, which I like.

But here’s the real bottom-line, if you’re not interested in Getaround, there are dozens of other legit side hustles, from running Facebook ads, freelance writing, dog walking, flipping furniture, and more.

With so many options, there’s no excuse to put off earning extra money.

Can you make money on Getaround?
+-

Yes, you can make somewhat passive income on Getaround. We say “somewhat” passive because you still need to schedule times your car is available, keep it cleaned, and you’ll have more frequent vehicle maintenance.

How much can you make with Getaround?
+-

Car owners can realistically make $100-$200 extra each month after Getaround’s commission has been paid.

Is Turo cheaper than Getaround?
+-

It depends on the kind of car you’re renting and from where. We did a quick search and found that a 2022 Toyota Camry cost $209 to rent on Getaround for 3 days, and it was $221 on Turo.

Getaround is a less expensive alternative to traditional car rental services. One of the reasons it’s less expensive is because you can choose your level of insurance coverage. 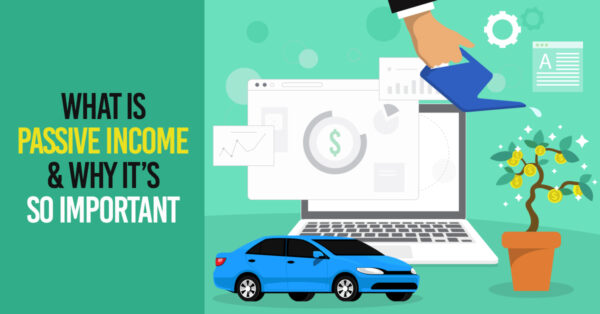 What is Passive Income & Why It’s So Important in 2023 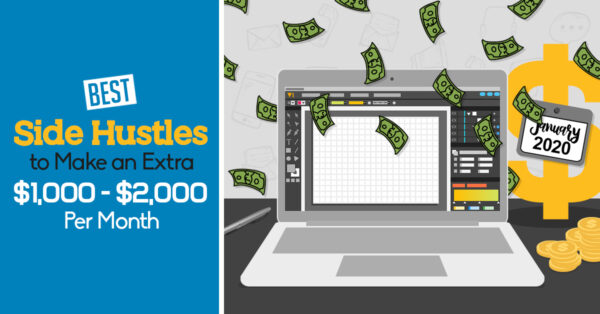 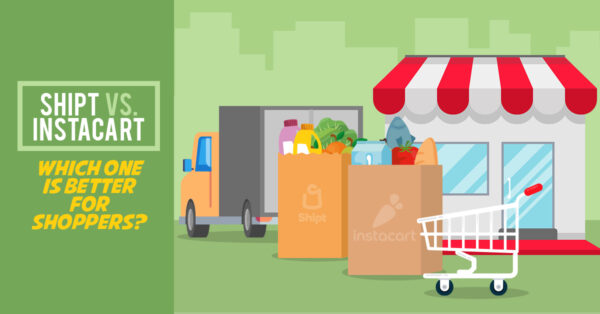