Your 2021 Tax Return: How the New Tax Law Will Affect Millennials

Hey everyone! Today I have an awesome guest post for you from…my accountant! That’s right – I brought in my very own accountant, Scott, to explain how the newest tax bill will affect us this year when we all file our taxes. Scott is super-knowledgeable and has been extremely helpful for me as my business has grown. I hope he helps you too! Enjoy – M$M

Officially known as the Tax Cuts and Jobs Acts (TCJA), this new tax bill went into effect on January 1, 2018, and will impact every millennial who pays taxes (yes, you).

The fanciful millennial archetype who lives in their parents’ basement playing video games and watching Netflix may be unaffected, but for everyone else, the TCJA is going to impact your 2021 tax bill, and therefore, your life.

In the run-up to the bill’s passage, members of Congress threw nearly every interest group under the bus and considered a number of provisions, only some of which actually became law.

Although the law was passed a year ago, it did not apply until the 2018 tax year for returns that are due in 2019, meaning that this is the first tax season during which taxpayers will file a return under the new rules.

If you are wondering how the TCJA will affect your 2021 tax bill, here are the top five tax issues likely to impact millennials:

1. Breaking Down the Brackets

Marry for the Tax Break Love

Under the new tax bill, the tax brackets for married filing joint (MFJ) couples have substantially changed. The amount of income taxed at lower rates is increased, and the applicable rate applying to most brackets is lowered. 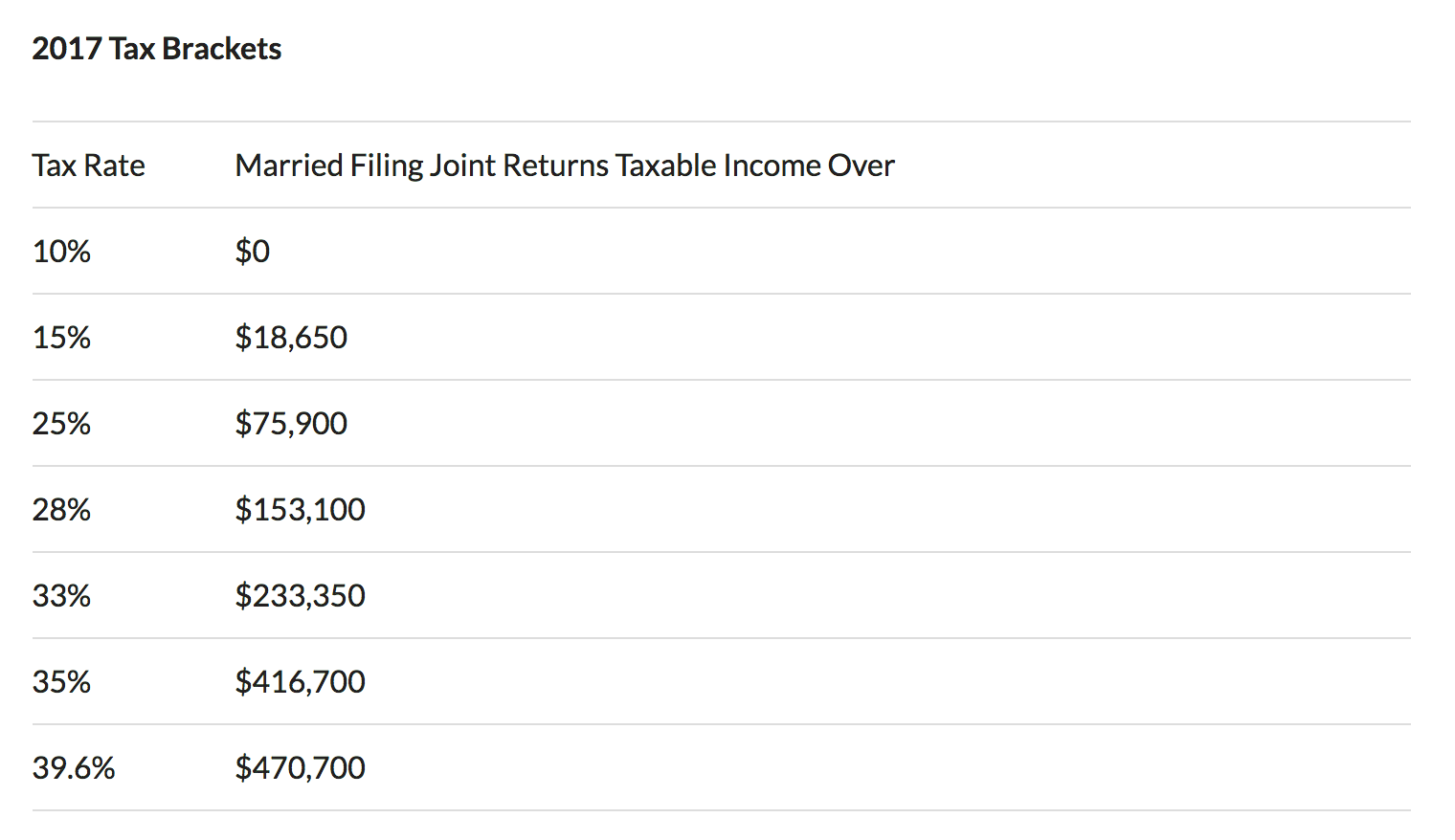 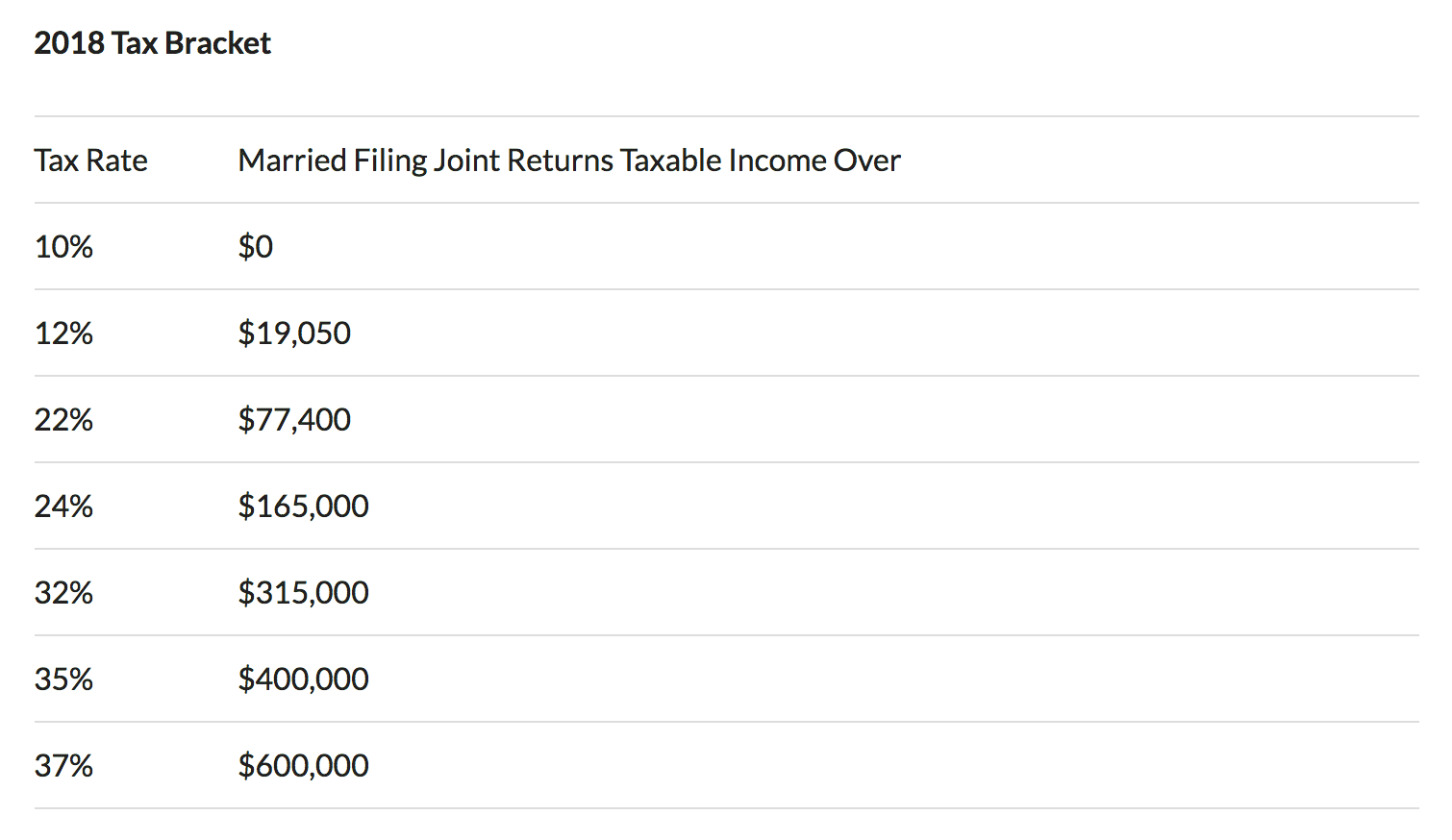 The tax brackets apply to your taxable income – that is, the amount of income left after you apply all eligible deductions. More on that below, but first, let’s examine the table.

Assume a married couple has taxable income of $165,000. Under the 2017 tax rates that applied to their 2017 income tax returns, this is how their income would be taxed:

Under the 2018 changes, the same couple’s income would be taxed as follows:

The picture is more of a mixed one for singles. Under the tax bill, those in the lowest and highest tax brackets will see their taxes reduced the most by percentage. Those earning between $200,000 – $415,000 will see less of a change. 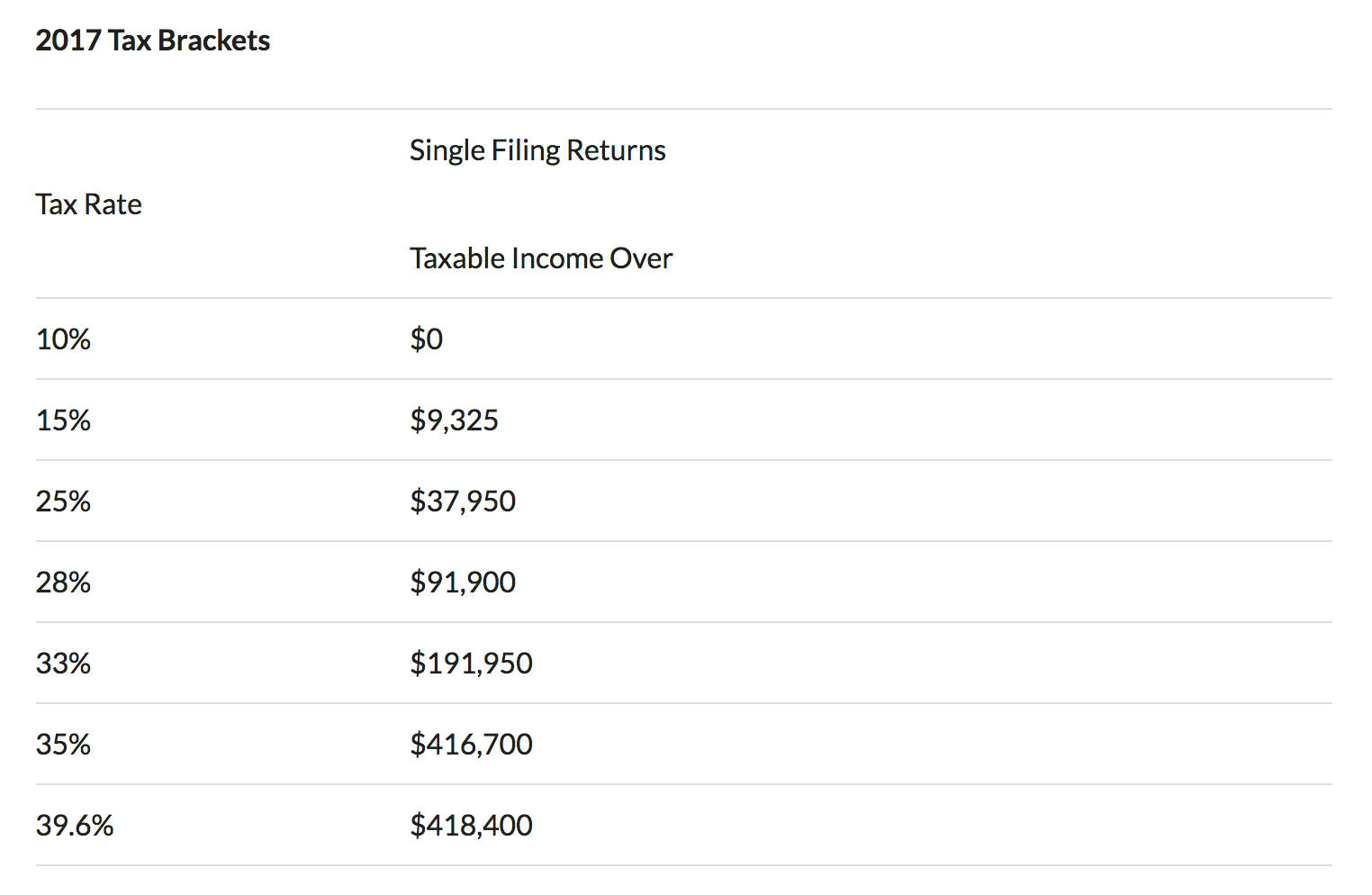 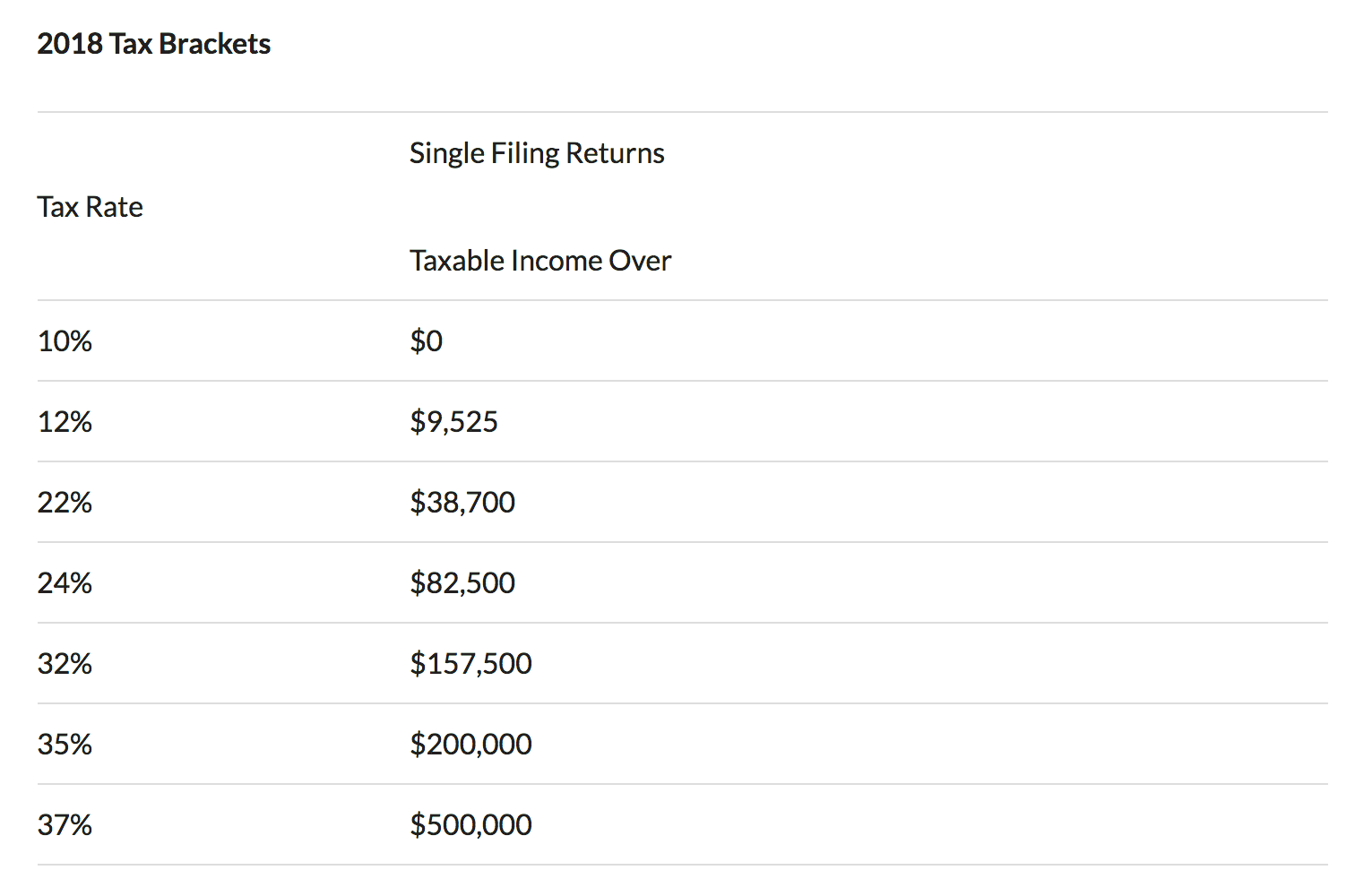 A common question I get from my clients is “if I get a raise, will this push me into a higher tax bracket?”

Keep in mind that the brackets are progressive; think of hiking a mountain versus taking an elevator and getting off on a new floor. As your income rises, your additional income is taxed at higher rates, but you always benefit from the lower rates as you climb the brackets. So, when that raise comes, you may pay a higher rate on the incremental income received, but all of the dollars earned before that are still taxed at the lower rates.

Under the prior law, many taxpayers found it advantageous to itemize deductions for mortgage interest, real estate taxes, state and local income taxes and charitable contributions since the sum of those exceeded the standard deduction.

Estimates indicate that the number of itemizers (no, that’s not a name for singles on Valentine’s, but there might an overlap) will drop from 46 million to 19 million; hence, a lot of taxpayers will have one fewer schedule to complete on their 2021 tax return to receive the same deduction.

The tax code giveth; the tax code taketh away. As part of the new tax bill, Congress imposed a new limit of $10,000 on how much you may deduct in state and local taxes, including real estate taxes, income taxes, and sales taxes.

For many homeowners around the country or higher income earners in states like California, New York, New Jersey, and Illinois, such taxes exceed the $10,000 amount. The limit is the same, regardless of if you are married or single.

For any side hustle investments you have, such as a rental property, there is no cap on the amount of real estate taxes that are deductible; the cap only applies to your personal residence.

Though targeted for elimination, the student loan interest deduction survived and remains in place. The maximum deduction is $2,500, and is phased out at certain incomes.

What’s the tax savings of this deduction? To determine this, multiply the $2,500 times your tax rate. If you were in the 22% tax bracket, the taxes actually saved would be equal to $550.

Although the standard deduction is increased for everyone, one deduction was eliminated in exchange, the personal exemption, which was another word for a deduction based on the number of dependents claimed, including yourself.

For married taxpayers with income over $436,300 ($384,000 for singles), this deduction was phased out, so not everyone was able to claim this deduction, and it was not that valuable for a single taxpayer since, by definition, they only had one dependent.

To cushion against the loss of this deduction for families, Congress increased the child tax credit to $2,000 per child, with a much higher phase-out than previously applied.

What’s a phase out?

That’s the amount of income at which Congress decided that the deduction should be limited.

In the past, the child tax credit was $1,000 per child, and the phase-out of the credit began for taxpayers with incomes of $110,000 for married taxpayers and $75,000 for single taxpayers. Thus, a married family with two children making $150,000 per year will now be eligible for a child tax credit of $4,000, whereas the same taxpayer would not have been eligible for any credit at all under the prior law.

The TCJA significantly changed the tax laws, and the effect of these changes will begin to be most felt through the 2019 income tax filing season for returns due in 2021.

There is a great deal of clickbait tax information that is published every year during tax season, and with the changes in the law, this year will likely see even more. In a future post, I will explain how to determine if you are really paying more or less under the new tax bill.

Disclaimer:  While I hope the information I provide will be helpful, none of this information should be construed as offering legal or tax advice or creating a client relationship between the reader and my law firm. You should not act or refrain from acting based on this advice and should consult your own attorney or CPA regarding your specific tax matters. IRS Circular 230 Notice: Nothing in this communication is intended to be used and cannot be used by a taxpayer for the purpose of avoiding penalties that may be imposed by law.