Hey De$troyers! Have you ever wondered what the hell Bitcoin is? I have. I literally don’t know anyone that has them, but I have this fear of it becoming a major currency and I won’t have any haha. My buddy John over at HowIGrowMyWealth.com is educating all of us on using Bitcoin to generate wealth today! ~ M$M

Have you heard of Bitcoin?

It is an exciting new investment technology. More seasoned citizens tend to be skeptical of newer investments which leaves the door open for millennials. I want to tell you about three great ways I use Bitcoin to grow my wealth.

Bitcoin is a decentralized digital currency.

What the heck does that even mean?

Let’s break it down.

It’s decentralized. Bitcoin isn’t controlled by one person or a single entity. Contrast that with dollars which are controlled by the Federal Reserve bank.

It’s digital. You can send and receive bitcoins across the globe via the internet.

It’s a currency. It’s kind of like dollars. You can use it to buy stuff!

How to Profit from Bitcoin:

There are three methods I utilize to profit from Bitcoin: Owning, Arbitrage, and finally Margin Funding.

Unlike dollars and other fiat currencies that constantly go down in value due to inflation (central banks creating more units of the currency), Bitcoin is deflationary.

What this means is that the number of Bitcoins that will ever be in existence is fixed, as a result there is upward pressure on the value of Bitcoins. So, as more people are interested in using the currency, the value will tend to rise over time. Buying directly and hoping it goes up in value is one speculative option.

Understanding how volatile Bitcoin is and dollar cost averaging is the name of the game.

I do hold some Bitcoins that I buy through CoinBase (get $10 free bitcoin when you buy $100 of coin using that link). But there are a variety of exchanges on which you can purchase Bitcoin. 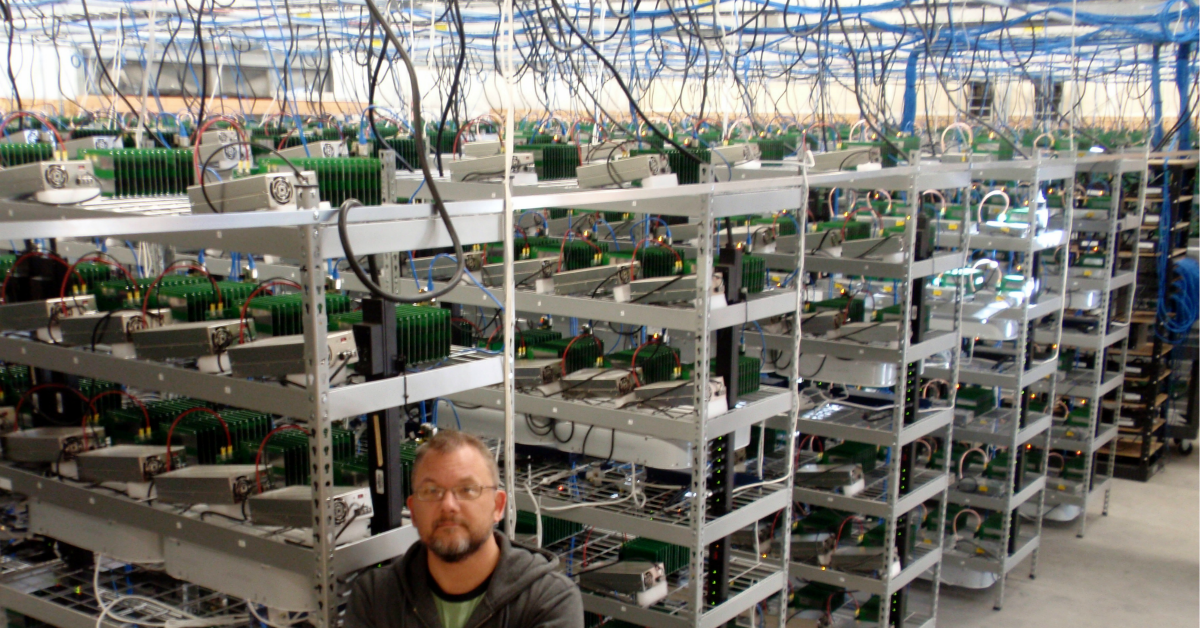 Some random guy and what is apparently the largest Bitcoin mine in existence?

While you could do this manually the price differences tend to be small and so you really need to do this thousands of times per day to make any real profits. I don’t have the time or patience to do that so I use an automated service.

One exchange called BitBays has an Arbitrage Fund that pays 12.95% per year and because it is denominated in USD you eliminate price fluctuation risk (and potential for reward).

You also expose yourself to USD devaluation risk. You could opt for the Arbitrage fund which pays 10.95% if you want to speculate on the upside potential of this currency and take advantage of the arbitrage rate of return.

But these margin traders need to borrow the Bitcoins from someone. So by lending to margin traders, you can earn a solid rate of return with little risk. The return fluctuates based on how much traders are willing to pay to borrow money but I’m on track to earn 20% this year.

Bitfinex is an online exchange that allows lenders to make money by loaning the currency to margin traders. I discuss this more in an article called Margin Funding to Generate Passive Income. You can choose to loan margin funding in either USD (which pays more interest) or Bitcoin (which pays less interest and has the risk and reward of Bitcoin going up or down).

Wrapping it up with a Bow

Hopefully you understand this currency a little better and have some new ideas for how to profit from this emerging technology. While it has been around since 2008 it is still relatively new and so you can be among the early adopters. Some people say it is too risky but the three investments above have work for me.

With stocks at all-time highs and savings accounts paying nothing these are three alternatives to traditional investments. Unlike mutual funds and bank accounts these aren’t your parents’ investments.

If you have any questions about these investments I’ll be monitoring the comments section to reply.

Live differently, your bank accounts will thank me later. ~ M$M