Pay Off Debt » Strategies » Snowball vs. Avalanche: Which Debt Payoff Strategy is Best?

Snowball vs. Avalanche: Which Debt Payoff Strategy is Best?

In the world of accelerated debt payoff strategies, there are two camps: debt snowball and debt avalanche. These strategies are both great because they will help you pay off your debts faster than just making the minimum payments alone. But, the major difference between debt snowball vs. avalanche is that one route is incredibly motivating and one saves you money – it’s all about the order you pay off your debts.

I’ve actually seen a lot of online arguments about which one is better… people have strong feelings about this kind of stuff… but the reality is that both the debt snowball and avalanche will have a positive effect on your debt.

You can use either of these methods for paying off student loans, credit card debt, doctor’s bills, car notes, your mortgage – any kind of debt.

So, put your snow boots on and grab your shovels, we’re about to dig in!

Sorry, I couldn’t resist the corny dad joke there.

Dave Ramsey has made this a really popular debt payoff strategy, and his followers preach the debt snowball hard. The reason being is that debt snowball gives you some early wins that motivate you to keep going. You build momentum by focusing on your smallest debts first, then rolling those payments together to focus on larger balances.

Here’s how the debt snowball works:

The early satisfaction you get from paying off those smaller debts is what drives you through your debt payoff… kind of like a “hey, you’ve got this!” Paying off debt can feel exhausting, so that positive feedback early on helps you from getting too fatigued.

The debt snowball in action

Say you have $40,000 in student loan debt. It’s not one loan, rather a bunch of smaller loans that you’ve borrowed at different interest rates. With the debt snowball, you’re going to ignore the interest rates and focus on the total amount of each debt.

I’m going to make up some loan details here to show you how you use the debt snowball in real life:

With the debt snowball, you’re going to start focusing your energy on Loan 4 because it has the lowest balance. If you have student loans, or any debt, you know that the numbers never look this clean and simple, but I rounded things out to make the math a little easier.

You’re paying $600 a month for just the minimum payments, but any extra money you have for debt is going to be used for that $3,000 loan. When that is paid off in a few months, your minimum payments will only be $550, but you will still pay $600 every month plus whatever extra you were putting towards Loan 4.

As you keep going, the amount you can put towards each new debt grows and grows. By the time you’ve gotten to Loan 1, you’ll be making payments that are more than three times what you should be paying.

If you were looking at that table above and were thinking “but look, you’ve got one loan with a much higher interest rate, that’s costing you so much more!” then you might be a debt avalanche person.

The debt avalanche is about math and what is going to save you the most money over time.

Here’s how the debt avalanche works:

The debt avalanche in action

Using those same loans as earlier, your debt payoff strategy is going to focus on Loan 1 which had a $15,000 balance and an interest rate of 6.5%. You will still pay $600 a month for just the minimum payments, but you will throw as much extra money at Loan 1 as possible.

The debt avalanche can make debts with large balances feel like they are dragging on forever. Because Loan 1 is five times larger than Loan 4, it might take you five times as long to pay it off… and you will feel that fatigue.

M$M tip: Read How to Stay Motivated While Paying Off Debt if you’re feeling that debt fatigue.

The real benefit of the debt avalanche is that your discipline will pay off and save you money on interest charges.

In this specific example, you aren’t shaving any time off of your debt payoff with the debt avalanche, but it sometimes can help you pay your debt off months earlier than you would with the debt snowball – you’ll see an example of this in just a second.

Pros and cons of debt snowball vs. avalanche

You’ve probably already gathered what I’m going to say here, but I want to give you a few key takeaways that will help you understand the difference in the snowball vs. avalanche debt payoff strategies.

Your actual savings and timeline with debt snowball vs. avalanche

I’ve said that using the debt avalanche can save you money over the course of your payoff, but the reality is that you’re not saving a ton.

Again, using the same example as before here is the reality of deciding between one debt payoff strategy over another. I used UnBury.me calculator. It’s free and you don’t need to sign up to use it unless you want it to save your loan information.

Results with the debt snowball: 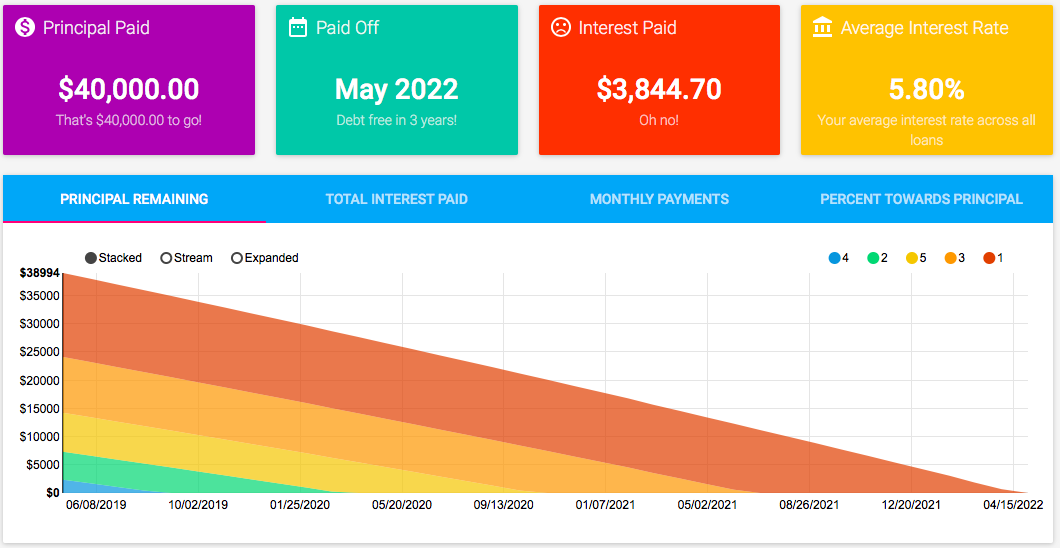 Results with the debt avalanche: 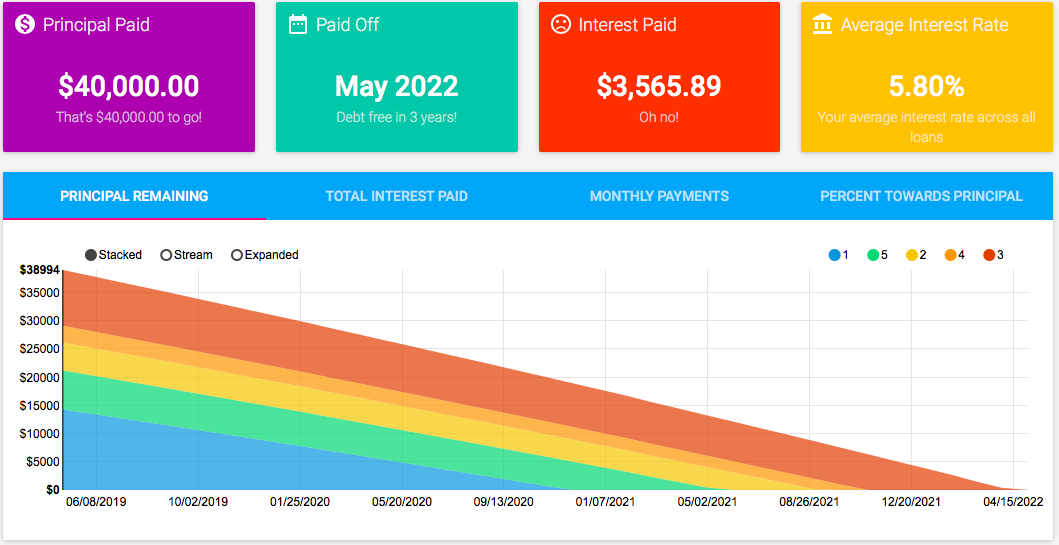 Using the debt avalanche in this situation is only saving you $278.81.

For high-interest debt, like credit cards, for example, you can save significantly more choosing between snowball vs. avalanche.

The debt avalanche not only saves you $1,961.83, but it also means you’ll be debt free two months earlier. Sweet! This is what I would personally choose to use in this case.

Not that I wish high-interest debt on anyone, but can you imagine what the debt avalanche could do for you if you had a bunch of it?

M$M tip: If you need to find more money to put towards your student loan debt, here are 7 Side Hustles You Can Actually Start in 2020.

Final word on debt snowball vs. avalanche – you don’t need to choose one or the other

The reality is that you don’t need to pick one debt payoff strategy and say that’s what I’m always doing forever. One way of approaching your debt is to start with the debt snowball. You’re going to see some wins at the beginning that will fire you up.

This is especially true if you have some pretty small balances. For example, you might have some student loans with just a few hundred dollars on them. Or, if you’re using one of these strategies to focus on other types of debt as well, you might have a $75 medical bill that you can wipe out in a month.

The debt snowball is so effective because you see progress in the very beginning – it teaches you that you can pay off your debt.

Once you’ve seen progress and are feeling pumped up, switch over to the debt avalanche. Work on your debts with the highest interest rates for as long as you stand it. If you’re feeling worn out, go back and pay off another one or two low balance debts.

And like you saw, the type of debt you have, having high-interest debt, for example, can play a big role in which debt payoff strategy you choose.

Either way, snowball or avalanche, you are accelerating your debt payoff. That’s an awesome thing, and that means you can start focusing on other important financial goals.