Ah, cars. I haven't written about them in such a long time on the site, because quite honestly…there wasn't much else to say.

I've made my feelings about financing new cars pretty well known, and that stance was one of the foundational pieces of content for M$M.

Cars are always a touchy subject when I bring it up on the site. For whatever reason (usually advertising), people really feel like their car is an extension of themselves. I guess it's really like anything else – clothes, shoes, makeup, nail polish (my wife is obsessed with that one haha).

Those are all items that people pay for to accentuate their personality in some way. I get it.

The problem with cars? On average in 2018, they cost $36,270. Not only are they crazy expensive, but they depreciate a ton as we all know, and most people borrow money for a long time to pay for them.

Check out this crazy stat from Edmunds:

Maybe that seems normal to some people, but to me, that just looks insane.

Not exactly the sexiest car, I know. As my business has done really well over the past few years, I've had so many people ask why I still drive a really old car.

Yes, I can afford a newer one. Yes, driving an older car can be inconvenient. Yes, it pisses me off sometimes when things break randomly.

But, I won't be driving a newer car anytime soon. My wife probably will be though, and I'll get to that in a little bit.

Please understand – I'm not some kind of masochist that just enjoys having a crappy car. I'm also not keeping this car just to prove that I'm ultra frugal or something.

I've actually written on M$M about how I'm NOT as frugal as I used to be. I'd be lying if I said I was, and it would be pretty lame if I kept my old car just to drive a false narrative (see what I did there?).

Here's why I still drive my 14-year-old car:

Well, there are actually a few reasons, but the biggest one is that I just don't really care about cars very much. They don't do anything for me.

I'm not embarrassed to drive an old car, and I certainly don't care if anyone thinks I “should” be driving a newer one.

Like…why should I be? You know what I mean?

Usually, when people say that to me it doesn't have any kind of rationality attached to it. People don't usually tell me that I should drive a newer car for safety reasons, and they also aren't giving me any data that shows how a new car will make me feel happier.

That's one of the unfortunate realities of our money culture (at least in America).

Once you start making more money, it's almost expected that you start to spend it at a higher clip. And if you don't…you should be embarrassed because you're cheap, and that is supposedly bad.

Maybe it's the contrarian in me, but I drive my old car around like it's a badge of honor. I'm proud of the fact that I can say that I don't owe any money on my car.

The other reason I don't have a newer car? Depreciation. They just lose value so fast, and it doesn't make a lot of sense to me to throw my money away voluntarily on something that doesn't bring me any additional joy.

Vacations? Heck yeah. I'll spend money on those. They make me happy.

If I thought for a second that having a newer car would bring some kind of emotional value to me, I'd jump on that opportunity immediately. But it won't, and I know it. 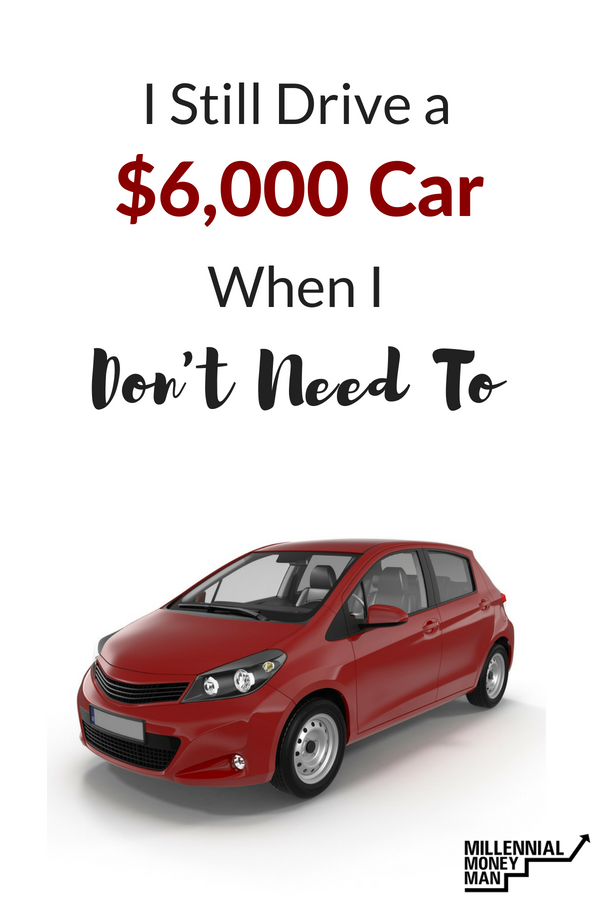 So when do you get a newer one?

That's actually a question that I have been struggling with since I started M$M. Readers have always asked me what my “guideline” is for upgrading your ride. Is there some kind of magical formula that we should all be using? Is it when you pay more for maintenance in a month than a car payment would be?

I really don't know, to be honest. All of the numerical guidelines I've ever seen just seem to be an arbitrary number that doesn't have much logic behind it.

My wife and I have always driven paid-off cars. I was super fortunate that my parents bought me a $12,000 Chevy Colorado before college.

It didn't have power locks or windows, and it wasn't the most comfortable ride out there…but it was better than nothing.

I eventually wanted to get a “nicer” car, so I sold the Colorado and got the car that I have now. Honestly, it's pretty nice. It has leather seats, which is about as fancy as I get.

But my wife's car is a hot flaming piece of absolute garbage right now.

She drives a 2004 Jeep Liberty, which she has had since she was a teenager. It did great for years!

But recently, that car helped me make a decision on when you should probably buy a newer car.

I truly don't feel safe when I drive it. In the last few months, it has had two major breakdowns. It left me stranded once, which I didn't think was a big deal. It was just inconvenient, and I typically don't base my purchases on a one-time event like that. Cars break down. They just do sometimes.

But then it left my wife stranded. That's when I got to the point where I looked at my business, looked at my bank accounts, and went: “Ok, this is ridiculous. There is no reason that your wife should have a car that is completely unreliable.”

Fortunately, we have been preparing for this day for years and have set aside money to get something newer.

She feels the same way about new cars that I do, which is really helpful when it comes to making a purchase like this.

Unfortunately, I hate the idea of having to go in and buy a car. Knowing me, I already feel sorry for whoever the sales rep is wherever we go. It's not like I'm going to be rude to them or anything, but I will absolutely be using every single negotiating tactic known to man.

There's a strong chance that my wife will be totally embarrassed that she even came with me, but I'm willing to risk that haha.

Truth be told, I actually just had a major repair done on my Yukon that cost a TON of money (catalytic converter went out, which means $$$). But when I average it out over the course of the year and take into account how cheap the insurance is, it was an easy decision to pay the money to keep it going.

So people can keep hating on me for my car. I don't care. If the criticism gets too bad, I might ask to drive my wife's car every once in a while if she'll let me. 🙂

Posted in: Tips And Hacks