As a lot of you know, January was a pretty huge month for M$M in a lot of ways. The most obvious, of course, is that I made way more money than I ever have before.

It wasn’t too long ago that I was a high school band director making around $3,400/month (I haven’t even been self-employed for three years yet). I remember exactly how hard I worked for my paychecks every month, so it was definitely surreal when I clicked a button on my computer and watched my monthly salary enter my account in less than 10 minutes.

There was obviously more to it than just clicking a button, but in a vacuum, it was a surreal experience for sure.

That was only a few weeks ago, and I’ve already had a ton of people email and message me all over the place congratulating me, and even a few comments that looked like: “Wow, that must be nice!”

And I’m not going to lie…it was.

But that’s not really the point of this post. I had a good idea that I was going to make a lot of money in January, just because the sheer interest in the Facebook Side Hustle Course was overwhelming from the first time that I even mentioned it.

We’ve all seen the articles out there featuring Mark Cuban and various other ultra-wealthy people that describe how money doesn’t make you happier.

I’ve always been so fascinated by that because as an underpaid (in my opinion) teacher I used to think: “Yeah right…I’d like to see for myself.”

It’s not that I wasn’t happy or anything like that when I had those thoughts. Generally, I feel like I’m a happy person. To me, it’s a huge win to just wake up every day, not to mention having an awesome wife, family, job, etc.

But I have always wondered if money was able to unlock some type of “bonus” level of happiness that rich people were just hiding so they wouldn’t make people jealous.

Now obviously, I’m not anywhere close to the level of financial success of the people that get interviewed for those articles. But I did get some valuable insight from the money that I did make from the recent course launch, and I thought it was interesting enough to share with all of you.

Here’s what it felt like bringing in $100k+ in four days:

I was super excited. Not going to lie.

Bad words in that song BTW so proceed with caution haha. ^^^

But after the initial excitement phase was over, I came back down to earth and had to start answering a million emails from people that were interested in buying the course that had questions on various aspects of it.

By the time the first day of the course launch was over, I was mentally exhausted.

But I did take some time to reflect and realized that I wasn’t any happier than I was before. In reality, the excitement came from not failing and didn’t have much to do with the $25,000 or so that we had brought in that day.

When it comes to this site and my business – I’m really hard on myself and have high expectations for the work that I do. All of you that have been around for a while know that I pour my heart and soul into making all of this run smoothly, so to see something that I had spent so much time on do well was really really cool.

The next few days were definitely a grind getting to all of the emails and handling little things that came up here or there.

It really all went by so quickly that I don’t remember a whole lot of it.

All I know is that by midnight on the last day of the launch, we had brought in over $120,000 of net revenue in four days.

That’s not a million bucks or anything, but it’s a lot of money for a regular dude like me.

But again…seeing the numbers in the account didn’t make me feel happier. It actually didn’t make me feel anything. It’s actually really weird because after the initial excitement wears off they are just numbers on a screen that don’t really elicit anything at all from an emotional standpoint.

I guess it’s interesting because I half-expected to look at the screen and feel something like this every time:

2. A few days after the launch…

Well. Still nothing in the “bonus happiness” department. Still the same normal happy me haha.

By this point, I was obviously really proud of the course and how well it was going, but it was kinda just back to business as usual.

I had spent so much time on the course that I had some serious catching up to do on content for M$M. I also run a small marketing business, so there was a lot of client work that needed to be done and emails that had been buried for days.

I had two fairly large expenses – a laptop for my assistant Melissa to use because she was using some bogus computer from the stone age (and I can’t be having that on my team!), and my truck had to go into the shop for some expensive repairs.

Outside of that, I haven’t made a bunch of emotional purchases or anything that might bring “additional happiness.”

I quite literally hate shopping anyway, so going out and buying random things probably wouldn’t do a whole lot for me. 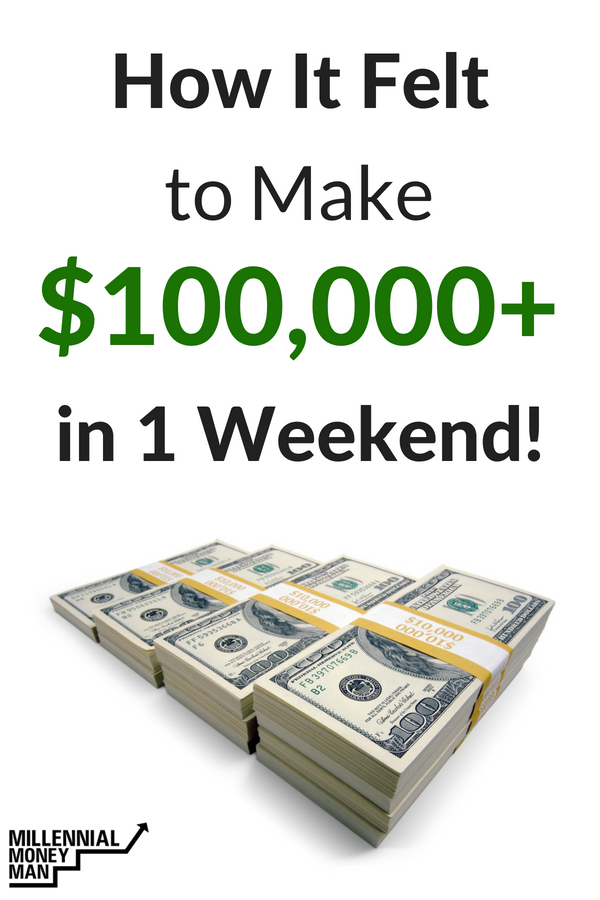 Now it’s on to the next thing. I’ve got a ton of projects coming up and want to keep the momentum growing for M$M.

There’s no doubt that this is a game changer for my business. I don’t expect to make $100k/month from the site quite yet (in fact I think there will be massive shifts month to month for a while), but I do know that I have some high-quality courses that will bring additional revenue streams to the business.

If there is any emotion that I’ve felt (and quite honestly I’m not sure if this is an emotion without Googling it), I’ve been calmer lately.

Ever since I’ve started my business, I’ve definitely noticed an underlying level of stress. As my wife can verify, the beginning of the month is always a reset for the business, which means I start tripping out about keeping pace and/or growing things.

For the time being, that stress hasn’t been there. I guess I feel like I’ve “made it” in terms of having a sustainable business, and can definitely start thinking of things quarterly instead of monthly moving forward.

Of course, stuff can always happen. But at least I know what I’m doing is on the right path and my audience is a force to be reckoned with (thanks by the way, M$M homies).

So from a happiness standpoint, I guess it’s more addition by subtraction. Not having to worry about M$M randomly failing is a really nice feeling!

But I still don’t feel overly joyous or anything like that when I look at my business bank account.

So does more money make you happier?

So far…not that I can tell.

It has seemed to cut back on stress a little bit, but I have a feeling (and knowing myself this is probably going to be true) that I’ll eventually start focusing on the next big goal and get stressed out about stuff again.

That’s just part of being an entrepreneur really. If I’m not pushing to the next level, I’ll feel like I’m not succeeding.

Here’s what I re-learned from the experience (and I’ll probably have to remind myself of this every few years just like we all do):

That’s why you should always find your happiness in the things that are tangible: Your family, spouse, career, and the sheer fact that you’re alive and able to experience anything at all.

The hard part about it is that everything we’re surrounded with in life paints an opposite reality, but don’t be fooled  – it’s a mirage.

Just take all of this as a friendly message from your neighborhood money blogger that you can’t focus on money in life. 🙂