Hey everyone! Today I have a great post for you by David from FinanceSuperhero.com. One of my big goals lately is to get more student loan payoff stories on the site. I’ve been so shocked to see all of the different ways people are getting rid of their student loans!

Something to note – please don’t look at these stories and think: “Ugh, I can never do that!”. The people that I’ve found to be the most successful with paying off any type of debt are the ones that look for strategies to take instead of blueprints to follow. We all have different paths. That’s life homies. Enjoy! ~M$M

The words “student loan debt” still send shivers down my spine. After finishing my MA in school administration in 2014, I owed $19,700 when my loans entered repayment. To make matters worse, I also owed $5,000 on my undergrad student loans.

Each passing day, my motivation to wipe out my loans grew. But there was one big problem:

I didn’t act on that motivation.

Things changed in 2015 when I began a new job as an assistant principal. My wife and I got a bit more serious about my debts just a few weeks later, and we began making extra payments.

One month, a rare three-paycheck month helped us pay off the rest of my undergrad loans, and the next month we were able to pay nearly $1,000 in additional principal on my grad school loans.

It felt good to be making progress, but after the holidays, we realized we still owed $18,000.

I honestly felt like I was cutting down a tree with a pocket knife; we were making progress, but it just wasn’t fast enough for me.

Meanwhile, things with my new job had been going south for months, and I wanted to quit just as badly as my boss wanted me to leave. I realized that even if I left my job, I would still have the constant reminder of a truly awful work experience with every single student loan payment.

One day, everything reached a tipping point, and I’d finally had enough. I decided to channel my emotion into action. In the next 54 days we paid off nearly $18,000, achieved debt freedom, and my eyes were opened to new and exciting career possibilities.

When I share our story with others, people are usually either shocked or completely dumbfounded. And when the story was picked up by CNBC and Yahoo! Finance, many commenters refused to believe that two educators could possibly pay off that much debt in under two months. They said we were liars, must have received a big inheritance, and wrote some awful things which aren’t worth repeating.

But the truth is that ordinary people can do extraordinary things with the right mindset and motivation.

Thanks to some intense frugality and willingness to take chances and bet on ourselves, my wife and I became the kind of debt destroyers we were used to reading about on MillennialMoneyMan. And we did it through old-fashioned hard work—without the benefit of anyone else’s help or money.

Next steps require going to the next level

Before we got serious about paying off my debt, my wife and I were budget-conscious, but we definitely were not frugal. We didn’t live it up by any means, but we had many of the usual millennial habits: going out to eat out of convenience, checking out new movies from time to time, grabbing a drink with friends, and shopping for “deals” on things we didn’t really need.

When we decided to pay off my loans, we decided it would be less painful if we did it with focus and intensity. We made many small changes which added up to be a larger percentage of our budget than I realized was possible. It wasn’t easy, but we cut out and/or reduced almost everything in our budget:

Because we own our house rather than rent (and live in an area with outrageous property taxes), these changes were literally the biggest money saving moves we could make.

After taking a scalpel to our budget, we basically lived what I call scorched-Earth style: we paid our mortgage, utilities, grocery bills, insurance, and gave to our church. That’s it.

Even with all of these cuts to our budget—which left us living off of less than half of our monthly income—we realized our payoff plan was still going to take us about 4-5 months. (On a related note: if anyone every tries to convince you that educators are overpaid, they’re either dishonest or horrible at math.)

Still, in under two months, we had managed to bring my loan balance down to $10,000. We lived like we were broke while our co-workers carried on like debt was just a part of life.

When I thought about our situations, I imagined our neighbors being swept up by a hurricane while our own house was ablaze in fire. Our situation wasn’t as bad, but it still sucked.

This mental image forced me to acknowledge that our debt was a financial emergency worthy of the best remedy we had at our disposal: our healthy emergency fund.

Simple math showed that we could pay off the remaining $10,000 balance on my loan debt without completely wiping out our emergency fund and other short-term savings. Our emergency fund was our security blanket; we had saved for a few years to build it up to the point that it covered nearly 6 months’ worth of living expenses.

It was hard, but we bet on ourselves and used a majority of our emergency fund to knock out $10,000 of my student loan debt.

Yeah, it was a little scary, but sometimes you just have to take big calculated risks to achieve big goals.

If you’re saddled with student loan debt and motivated to pay it off early, you need the right motivation and mindset to do something about it. If you focus on all that you have to gain—freedom, happiness, the opportunity to leave a job you hate and pursue your dreams—and sacrifice until it hurts, you can replicate our results.

It’s not going to be easy. At times, it will really suck, but don’t give up. Remember these wise words from Jim Rohn: “Discipline is the bridge between goals and accomplishment.”

David Cahill is the founder of FinanceSuperhero.com, a personal finance site devoted to helping readers Take Back Control of Life and Money. 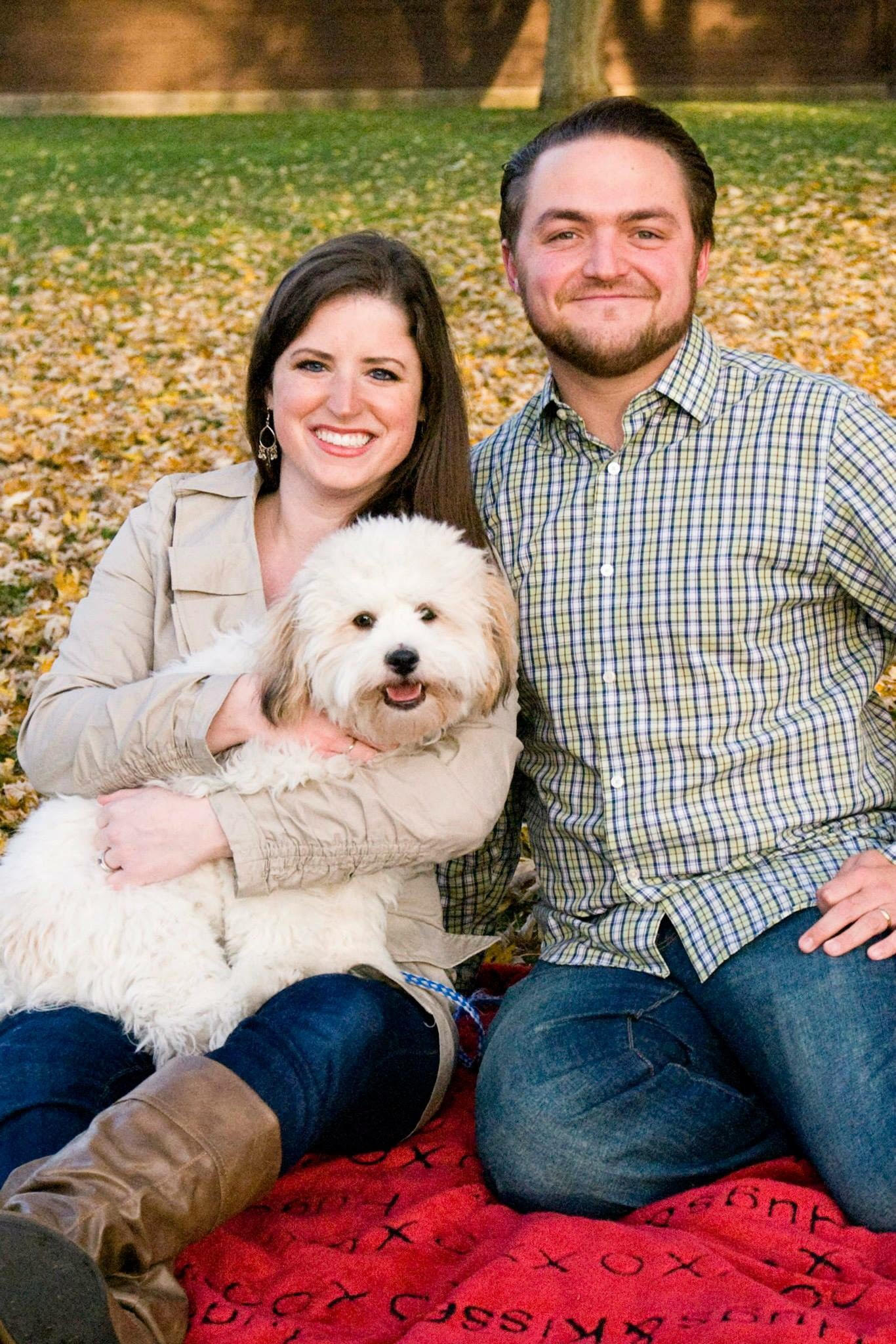 David, his wife, and doggo Ramsey!