5 Ways to Keep Money from Destroying Your Marriage

Some of the most common questions I get from readers are about marriage and money. Sometimes it’s simple stuff like: “Should we get a joint checking account or keep it separate?” But sometimes…it’s way more serious!

I’ve had many readers tell me that their finances were causing their marriage to basically fall apart.

I’m not a marriage counselor by any stretch of the imagination, but I do feel like my marriage is pretty awesome, and my wife and I have figured out some great tricks to prevent us from arguing about money. So, when I get those questions, I do my best to give them some guidance when I feel it’s appropriate.

The truth is – my wife and I have been broke before, and now we’re not. For most marriages, things are obviously easier when you’re making better money because knowing that you’re able to pay the bills and set some aside is one less source of stress and tension.

Still, no matter what stage you’re at in your marriage or financial life, there are plenty of things you will need to consider when discussing your finances.

Here are some of the strategies my wife and I use to keep money from coming between our marriage:

1. Talk about it early and often

To have a successful marriage, you need to have good communication – that’s a no-brainer, but it’s still harder than it sounds. If one person in the relationship is worried about money and the other isn’t, it’s pretty easy for things to fall off the rails, especially if no one is talking about it.

I’ll give a personal example:

Back when I first started my business, I wasn’t making much money at all. There were months when I was worried the business wouldn’t make it, and it was really scary!

For a long time, I wouldn’t say anything to my wife about it because I didn’t want her to worry.

I’d eventually get really stressed out, which would lead to an argument over something silly that had nothing to do with money…even though money was the root of the problem.

Eventually, we realized that it would be better if we checked in more often and talked about how everything was going. This prevented either one of us for going too long with unspoken fears or concerns about our finances and letting that stress affect the rest of our marriage.

Having regular, and sometimes uncomfortable, conversations about money is much better than holding it in and making it worse.

As I’ve made more money, communicating has still been important and always keeps us on the same page.

2. Track your spending and investments

For the most part, I’d say that M$M readers are really good at tracking their spending, but I do come across readers who have never done it before.

Fortunately, it’s really easy if you know what to do!

My first piece of advice is to find and immediately start using some type of budgeting software. There are so many great tools out there right now for budgeting!

If you’re a little more old school, that’s OK too. I know plenty of couples who really like to get hands-on and manually enter their information into spreadsheets.

Either way, it’s important to know what’s coming in and going out every month. Once you know, you can do something about it rather than wondering why your money never seems to quite make it to the end of the month.

You can find all of my budgeting recommendations and free excel spreadsheets here.

If you’re a little further along financially, then you’ll also need to start tracking your investments in one place.

My wife and I use Personal Capital, and so far it’s been awesome. We can track both of our IRA’s and our joint brokerage account daily, which is awesome because we always know where we stand with our net worth and investments.

After you know where your money is going every month, you can sit down together and make a plan to move forward.

For example, my wife and I have noticed that our spending has been increasing lately.

Even though I’m making more money now, that’s never a guarantee in business! I don’t mind if our lifestyle increases a bit because I do work extremely hard for my money, but we also want to make sure that we’re prepared for any setbacks that might come along the way.

Because we are tracking our spending, we were quickly able to notice that food has really been where we’ve slacked the most, so we’re going to get back into the habit of grocery shopping and buying food in bulk.

It’s also healthier than eating at restaurants, so cutting back on food spending will help us meet our fitness goals as well.

If we weren’t tracking our spending, we’d have no way to create a plan.

It’s more than OK for you and your spouse to have your own life goals, but Coral and I have found that it’s really helpful to be on the same page with the bigger money decisions.

For example, I would be totally cool with traveling full-time or at least living somewhere else.

She loves being close to family and doesn’t want to move.

So…we’re compromising. We’ll continue to live in the same place, but we’ll make it a point to travel as often as we can.

And even though compromising is incredibly important, sometimes you need to offer full-out support for your spouse’s life goals. If Coral really wanted to do something that I didn’t want to, I’d do whatever I could to support her, and I think she’d do the same for me.

5. Reward yourself for your money wins

Historically, Coral and I have been pretty terrible about celebrating when something goes well. We spent the majority of our 20’s really far below our means and were almost afraid to spend money sometimes.

Now, I’ve learned that it’s really cool to celebrate your successes. It doesn’t have to be anything crazy like buying a new car or taking a $10,000 vacation – I’m talking about smaller things like a nice bottle of wine or going out to dinner.

If you hit your budgeting goals or a certain debt-payoff milestone…go celebrate. Do something cool, you earned it. The reality is that most people don’t focus on getting ahead with personal finances at all, so the fact that you did anything is awesome in itself..

It’s OK to spend money on fun stuff sometimes. It took me a while to learn that, but celebrating fun stuff with your spouse is awesome.

Remember, you’re on the same team

It can be easy to forget sometimes, but marriage is a partnership. Not to diminish it, but in some ways, it’s like going into a lifelong business partnership with your best friend, and this means all money decisions affect the both of you.

As with any partnership, good communication is really the biggest asset you and your spouse have when ensuring that money doesn’t wreck your marriage, and it’s the basis for everything discussed in this post.

Money will likely always plays a huge factor in your relationship. It can add stability, cause stress, and even cause for celebration (as well as funding that celebration). This is all why money can be incredibly hard to discuss.

Money talks shouldn’t be interrogations (remember, you’re both on the same team right?), and if you are feeling that way, you need to address the negative role money might be playing in your marriage before it’s destroyed.

All it takes is one good conversation to get started, and I bet your spouse is just as nervous as you are. The payoff is creating plans and goals that work for the the both of you, while making it easier to manage your money.

The awesome extra bonus of this is that when you do it all well, you and and your best friend get to reap the rewards. 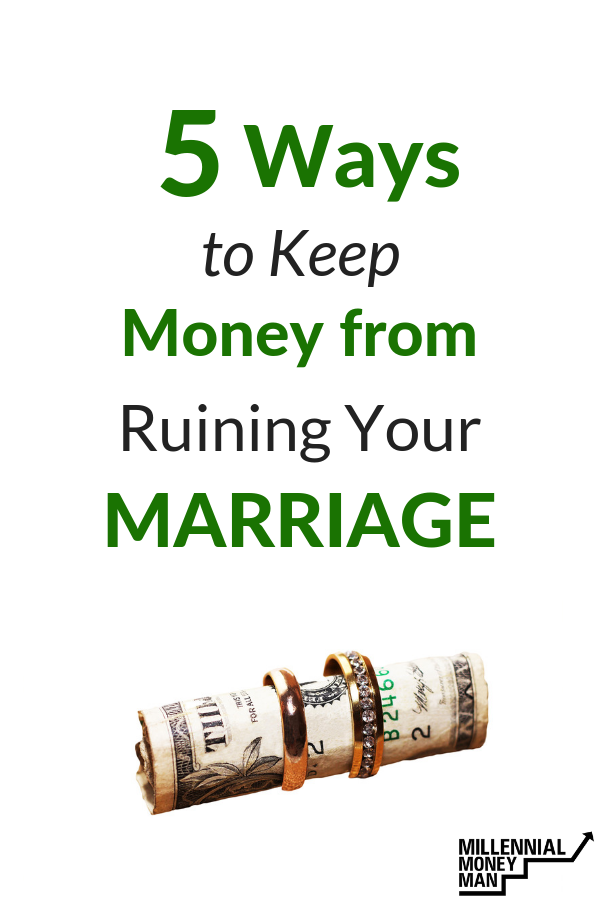